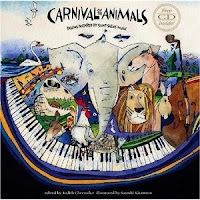 The Carnival of the Animals, edited by Judith Chernaik, with CD by the Apollo Chamber Players, David Chernaik, conductor. (Candlewick Press, $16.99)
My aunt Judith is the creator of Poems on the Underground, posting poetry alongside advertisements on the London Underground since 1986. This illustrated version of “The Carnival of the Animals” has new poems penned by previously posted poets (plus my aunt) and illustrations by Satoshi Kitamura, with an orchestral CD conducted by my cousin David. With poems read in lovely British accents!

The Teahouse Fire by Ellis Avery (Penguin, $15)
Nif’s friend Ellis won a Lambda Award for this intense novel, set in Japan just before widespread contact with the outside world, when cultural traditions turn upside down.

Yes Means Yes! Visions of Female Sexual Power & a World Without Rape, co-edited by Jaclyn Friedman and Jessica Valenti (Seal Press, $16.95)
Since we knew each other in college, Jaclyn has used her writing, performance, and activism to highlight messages about feminism, sexual assault, and sexual self-empowerment. A collection of powerful essays.

A Series of Unfortunate Events by Lemony Snicket
(HarperCollins, $12.99; early volumes available in paperback for $6.99)
If you’ve read the first few books of this series and stopped for fear they would become repetitive, I urge you to continue on: soon you will encounter the overarching story arc, intrigue about the author, and Sunny’s unstoppable progress with language. I had a lot of fun! (Technically, it’s not Lemony Snicket I know, but his nonfictional handler.)

Thanks for the mention!