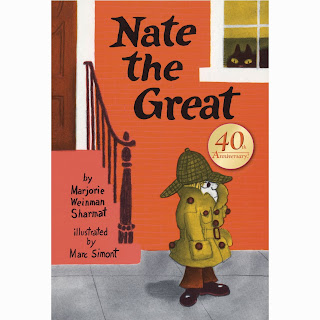 Nate the Great by Marjorie Weinman Sharmat (Random House, $4.99 each)

The Sisters Grimm by Michael Buckley (Harry Abrams, $7.95 each)

The Clubhouse Mysteries by Sharon Draper (Simon and Schuster, $4.99 each) 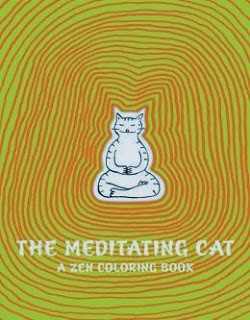 Mr. Wuffles! by David Wiesner (Houghton, $17.99)
The story of a cat with ennui, the aliens who enliven his day, and the help they receive from the locals. See my recent author interview here.
Update, 1/27/14: A Caldecott Honor Book!

Bits & Pieces by Judy Schachner
(Penguin, $17.99)
Sequel to her picture book The Grannyman. Look for an author interview on the blog in February!

Unlikely Loves: 43 Heartwarming True Stories from the Animal Kingdom by Jennifer Holland (Workman, $13.95)
Not all cats, but some! I was impressed with the intro essay about what constitutes love in this context. 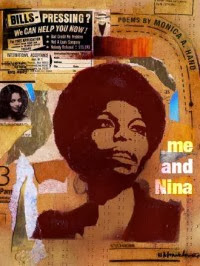 As proof of Alfred Corn's assertion that "poetry has never fully disengaged itself from its associations with shamanism," five contemporary poets who will woo, sway, and shake you.

A Child's Christmas in Wales by Dylan Thomas (New Directions, $9.95) 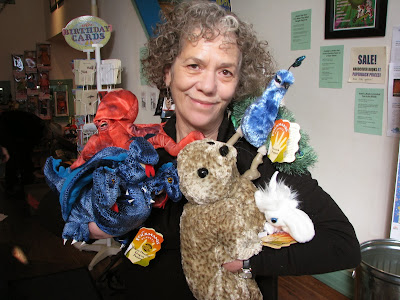 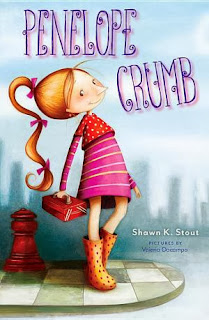 
The first three books in my new middle grade series, Penelope Crumb, Penelope Crumb Never Forgets, and Penelope Crumb Finds Her Luck published by Philomel/Penguin, are in bookstores now! Penelope is a fourth grader with a big nose and an even bigger imagination. She does a lot of sneaking around, fibbing an eensy-weensy bit, and breaking about a gazillion of her mother’s rules. Oh goodness. This Penelope Crumb girl sounds like a handful, doesn’t she?
Penelope Crumb was chosen as a Bankstreet Best Book of 2013!
Penelope has her very own book trailer on YouTube. If you check it out, I will like you a whole big bunch.
The fourth book in the series, Penelope Crumb Is Mad at theMoon, will be released in 2014.
Now on to the interview . . .
Hi Shawn! The Penelope Crumb series is just delightful! I loved reading it out loud to my almost 8 year old twins. They both laughed a whole lot.
I noticed that the Penelope Crumb series focuses quite a bit on Penelope’s relationships with senior citizens. Was this intentional? Are you interested in how kids interact with the elderly?
This fact only occurred to me only after I’d written the third book in the series (so this ought to tell you how alarmingly attuned I am to what I’m writing). Although not intentional, I suppose it’s not surprising. Much of my childhood was spent hanging around with older people. My grandmother lived with us for a time, and when her arthritis got bad enough that she could no longer grip a bowling ball and had to drop out of her bowling league, I took her place. I was 14, and everybody else was pushing 80. I had a headgear, they had hearing aids. There was symmetry.
Yeah, I was That Girl.
Penelope is charming but she certainly has her faults. I was interested in how much I felt connected to her but also pretty sure she was “in the wrong” a fair amount of the time. Was this a hard balance for you to strike as a writer?
I like to think that Penelope makes the wrong decisions for the right reasons. She definitely has a unique view of how the world works, or should work, and I think she recognizes on some level that she’s a little different from other kids her age—and not just because of her big nose or because her father is Graveyard Dead. Although the latter has definitely shaped her experience and worldview. These differences are constantly being revealed to her, and as they become evident, she has to understand and learn how to deal with them. Most of the time, she makes the wrong choices, but isn’t that what being young is about? It was for me, at least.
I wanted Penelope to be different but always likeable, and I think I was aware of crossing that line when writing. Penelope means well, she really and truly does, and as long as I stayed true to her “right reasons” for making such bad choices, I felt readers would (hopefully) still want to root for her. I still root for her.
How did Penelope come to you? Fully constructed? As an image? As a voice?
Nothing ever comes to me fully constructed, sadly. How do you go about getting one of those fully constructed ideas? Someone please tell me immediately.
I had an idea centuries ago for a picture book about a girl with a big nose. I worked on a couple of drafts and then realized 1) I can’t write picture books, and 2) the story could be bigger than I originally conceived. Nearly 30 drafts later, Penelope’s voice is just about the only thing that stuck.
I like how proud Penelope is of her nose. And, in the first book, this pride sort of leads her to her missing grandfather. Such an unusual premise for a book. Is there a part of the book that is sort of a message to kids, to feel okay about the ways they are different? That this difference might even lead to something positive?
I don’t really think about messages in the story while I’m telling it. That is to say, I don’t write with messages in mind. I just try to tell a story and be true to the characters. Penelope is just the sort of character who admires standout features (it’s an artist’s job to notice such things) and happens to be proud of her big nose—for its “standout-ishness” and because it connects her to her dead father and her missing grandfather. Everyone is different, in their own way, after all; it’s just that some differences are on the outside and are more noticeable than others. If readers find a positive message about that from Penelope, something that helps them feel good about themselves, then I’ve got goosebumps.
I like Littie Maple a whole lot. I’m just saying. Any chance she might get her own series?!
Littie Maple should definitely have her own series. I’m in complete agreement with you on that. Let’s start a petition.
Let’s do it!
I read these books out loud to my kids, which made me more aware I think of the repetition in phrases in your characters and the very specific language Penelope uses to see the world (like the way she explains everyone’s expressions). Do you have a favorite catch phrase yourself?
I say “oh crap” a lot. Does that count as a catch phrase? I also say “marvy” every now and then, but only when I’m feeling especially rebellious.
What are you working on now? More Penelope Crumb? Something else?
I recently finished the fourth book in the series, called PENELOPE CRUMB IS MAD AT THE MOON (September 2014/Philomel). Warning: There’s a dreaded square dance involved in this book, and also a mishap at a fire safety assembly. I will say no more…

I’ve also been collaborating with my husband on a top-secret project, and I have a drawer full of manuscripts I need to look at to see if there is any breath in them. If I could find a way to write while I slept, I would be much more productive. Also, if my two-and-a-half year old could type, or spell, that would help me out a lot.
And now for our regular “3 for 3” book-related questions:

1.What were 3 of your favorite books when you were a child or teen?
The Secret Garden by Frances Hodgson Burnett
Ramona the Pest by Beverly Cleary
The Outsiders by S.E. Hinton
2. What are 3 books you’ve read recently that surprised you?
Dead End in Norvelt by Jack Gantos
Graceling by Kristin Cashore
Piggy Bunny by Rachel Vail
What are 3 books that influence/d your writing?
The Penderwicks: A Summer Tale of Four Sisters, Two Rabbits, and a Very Interesting Boy by Jeanne Birdsall
Stargirl by Jerry Spinelli
The Evolution of Calpurnia Tate by Jacqueline Kelly 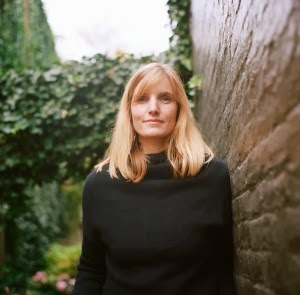 Shawn K. Stout writes books for young people and anyone else who will read them. She is the author of the Not-So-Ordinary Girl series (Aladdin/Simon & Schuster) and the Penelope Crumb series (Philomel/Penguin). She has an MFA in Writing for Children and Young Adults from Vermont College of Fine Arts. She lives with her family, and more dirty dishes than you’d care to count, in Maryland.
Thanks for reading!!! If you're local to the area, please let the bookstore know if you would like to place a special order for any of the Penelope Crumb books.  You can email orders to orders [at] bigbluemarblebooks [dot] com, call (215) 844-1870, or come see us at 551 Carpenter Lane, in the Mt. Airy neighborhood of Philadelphia.
In January, look for Cordelia's interview with Miriam Glassman, author of the chapter book Call Me Oklahoma, and Jen's interview with Judy Schachner, author of the Skippyjon Jones series and the new picture book Bits & Pieces!
Posted by Cordelia Jensen at 8:34 AM 2 comments: