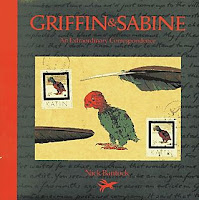 I confess: I’m a snoop. I will go through the text messages on your cell phone. I will read your email and sift through your private papers. If you have a deep, dark secret, do not keep it in a shoebox in your closet. I will find it. Luckily, there is a literary genre that allows me to indulge my need to snoop: the epistolary novel. I can read other people’s fake letters and nobody gets hurt.

Griffin & Sabine: An Extraordinary Correspondence by Nick Bantock (Chronicle Books, $19.95)
The letter fetishist in me lives her guilty pleasure each and every time she slips between the covers of this beautifully written and illustrated book. The correspondence of the title characters is fastened to the pages allowing you to slip handwritten letters from their envelopes and hold them between your sweaty palms. Feel like both a god and a pervert as you examine the intimate letters of Griffin Moss, an isolated artist living in London, and Sabine Strohem, an unknown woman who, though thousands of miles away, can somehow see and experience his art as he creates it. Is she real or a figment of Griffin’s troubled imagination? “Foolish man,” Sabine writes, “You cannot turn me into a phantom because you are frightened.” Nothing like a quarrelsome muse to make you question your own sanity.

84, Charing Cross Road by Helene Hanff (Penguin, $13.00)
This book is the exception on the list in that the extraordinary correspondence within its pages is entirely real. While living in New York and working as both a playwright and screenwriter, the Philadelphia born Hanff, began writing to Marks & Co., Booksellers in London in search of hard-to-find books. What evolved was a twenty year correspondence between Hanff and the employees of Marks & Co., specifically Frank Doel, the reserved Englishman in charge of granting her literary requests. Hanff’s spirited letters betray her fine wit and dry sense of humor. She is a literary broad of the finest quality and it’s thrilling to witness her relationship with her friends across the Atlantic unfold from one letter to the next.

The Perks of Being a Wallflower by Stephen Chbosky (Simon & Schuster, $14.00)
Wallflower has been called many things ranging from cult classic to a coming of age story in the vein of The Catcher in the Rye, which the book itself references in passing. Neither of these descriptions does it justice for me. When you open the pages and immerse yourself in the letters of the titular wallflower, Charlie, what emerges is an unflinching portrait of a teenaged boy caught between passivity and the desire to “participate.” The novel is composed solely of Charlie’s letters addressed to an anonymous “Friend,” a one-way communication which leaves the reader to fill the other half of the correspondence. It’s an intimate and troubling role to fill as you witness Charlie’s struggle to engage not only the people around him, but his own personhood.

Ella Minnow Pea by Mark Dunn (Anchor Books, $14.00)
Say the title three times fast. Sound like a familiar sequence of letters? Letters, i.e., the individual characters which make up our alphabet, are of the utmost importance in Dunn’s pleasantly clever tale of the tiny island nation of Nollop, whose citizens find their speech increasingly restricted as the use of one letter after another is outlawed. Dunn’s characters savor language and it’s an absolute delight to read their missives and experience their struggle to preserve their right to write using each and every letter of the alphabet, even that “funny little letter” Z.

The Color Purple by Alice Walker (Houghton Mifflin, $14.95)
Walker’s Pulitzer Prize winning novel begins with Celie’s letters to God. It’s a tricky thing writing to God. I don’t know of anyone who has His address and chances are He won’t write back. But for Celie, there aren’t many who will stand as witness to the unflinching brutality of her life. Her forthright language does nothing to disguise the pain and violence of her existence, but she draws strength from the women around her (the indomitable Sofia, the scintillating Shug Avery) and discovers herself in the process. Celie’s beautiful, tender humanity unfolds in her letters through the stark, blunt honesty of her words.