5 Sequels Nif is Excited About

A Conspiracy of Kings by Megan Whalen Turner (HarperCollins, $16.99). If you’ve read The Thief, The Queen of Attolia, and The King of Attolia, then you must find out what happened to Sophos. Personally, I’m on the edge of my seat for the next one after this, and anguished that Megan Whalen Turner takes so long to write them. Great for fantasy fans aged 10 to 110.

The God of the Hive by Laurie R. King (Random House $25.00), picks up right where The Language of Bees leaves off. Who IS the enemy pursuing Russell, Holmes, his son, and his young granddaughter, and when will they be safe? A satisfying conclusion.

I Shall Wear Midnight by Terry Pratchett (HarperCollins, $16.99). A fourth and final Tiffany Aching book! My heart welled up with love again and again as I read it. Start with Wee Free Men and A Hat Full of Sky and you too will be cheering for the young witch from The Chalk.

November 2010, Jennifer Woodfin
Posted by Big Blue Marble Web at 10:00 AM No comments: 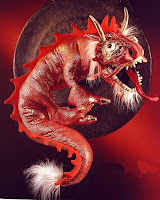 Our merchandise has expanded to include a variety of plush toys, puppets, block sets, games, puzzles, and other beautifully crafted toys for babies and children. A few of my favorite items to hold include:

Red Dragon Puppet by Folkmanis ($21.99)
Silky, soft, brilliant red and gold with a face threatening but friendly. This dragon is simply aching for a hand inside to make it come alive.

Classic Pooh Plush by Kids Preferred ($15.00)
Pooh and the rest as they appear in A. A. Milne's classic with luxurious fur.

Mini Finger Puppets by Folkmanis ($6.99-$7.99)
Owls, moose, bears, porcupines, and rabbits operated with the touch of a finger.

Musical Instrument Set by Kids Preferred ($25.00)
A quietly musical stuffed set in its own carrying bag. No headache-producing cymbals!

This year marks the 16th anniversary of the release of the movie Pulp Fiction. I give Pulp Fiction the dubious honor of being THE MOVIE THAT STOLE MY CHILDHOOD. Before seeing it, I had only vague, shadowy imaginings of the concepts of drug overdose and male rape. Pulp Fiction exposed me to both amidst trenchant mirth and gleeful mayhem in harsh, glaring Technicolor. Here are five books that did something similar. Yeah, I’m a big girl now, but I don’t have to like it.

The Road by Cormac McCarthy (Vintage, $14.95)
People think Cormac McCarthy is brilliant. I think he sits at home thinking up new and horrific ways humans can kill and cannibalize each other. Father and son walk the road in a post-apocalyptic world gone all “Mad-Maxy” with roving bands of evil-doers, while trying to preserve their own humanity. Not only is this no country for old men, it’s apparently no country for my innocence—Cormac, you dark bastard.

John Dollar by Marianne Wiggins (WSP, $14.00)
What is it about little girls that makes them so damned evil? Strand them on a deserted island and the result is a hundred times more terrifying, gut-wrenching and erotically charged than Lord of the Flies. Oh, Robinson Crusoe, you think you had it tough. Just be glad you’re not a sailor by the name of John Dollar.

Beloved by Toni Morrison (Vintage, $15.00)
Holy heck, Toni Morrison! Did you have to do it? Did you have to use fiction as a means of bearing witness to atrocity and human suffering? Are you and Elie Wiesel engaged in some demented game of one-upmanship in which you try to outdo each other in portraying the horrors visited upon a people? How is it that a work for fiction can be so undeniably, irrevocably true?

Money by Martin Amis (Penguin, $15.00)
Wait, you mean you can write yourself into your own novel as, like, a character and then run into your own protagonist whom you have consequently named John Self? Which wall is this breaking, 4th, 5th, 6th? Be gentle with me, buddy. It’s my first time at metafiction and I hear the first time always hurts. 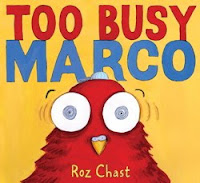 Too Busy Marco by Roz Chast (Simon and Schuster, $16.99)
I know a lot of adults who need this book about how you have to go to bed when it is bedtime. So many people close to me stay up all night because they want to figure out how to save the world before they go to sleep. Marco's aspirations are much funnier though. Also Roz Chast is always a winner in my book.

Anh's Anger by Gail Silver, illustrated by Christiane Kromer
(Plum Blossom Books, $16.95)
It's okay to be angry. It's how you deal with being angry. This book proposes one way to deal with anger. Also it has beautiful illustrations.

We Are In a Book! by Mo Willems (Hyperion, $8.99)
Actually, to be honest I recommend pretty much every Mo Willems book to adults because they are funny and clever on so many levels. This one is best read out-loud. It's like a Droste picture. So much love for Mo Willems. Just read any of them when you need to laugh.

I Like You by Sandol Stoddard Warburg, illustrated by Jacqueline Chwast
(Houghton Mifflin, $6.95)
This book is sweet. Give it to a best friend or sweetie or someone you like.

Savvy by Ingrid Law (Penguin, $7.99)
The gift of figuring out one’s new gift.

Wringer by Jerry Spinelli (HarperCollins, $6.99)
The gift of facing dread ... and resisting.

Flora Segunda by Ysabeau Wilce (Houghton, $7.95)
The gift of unplanned opportunities to find one’s own way.

I Am Invited to a Party! by Mo Willems (HarperCollins, $8.99)
The gift of knowing parties.

November 2010, Jennifer Sheffield
Posted by Big Blue Marble Web at 10:00 AM No comments:

These are all books I've discovered in the five years since the store opened and which capture why I love selling books: finding things I love and passing them along.

The Dreamhunter Duet by Elizabeth Knox (Dreamhunter and Dreamquake, Square Fish, $8.99 and $9.99)
Girls coming to grips with adolescence, dreams that can be caught and passed on like a virus, and an epic confrontation with villainy...what could be better? Why, a golem, of course!

That Rabbit Belongs to Emily Brown by Cressida Cowell and Neal Layton (Hyperion is letting this one go out of print, but we'll try to keep the British edition around! Orchard Books, about $10.25)
Absolutely pitch-perfect depiction of an adventurer's relationship with her rabbit and her confrontation with the silly, naughty queen who wants to take him away, with playful, energetic illustrations. By the author of How to Train Your Dragon.

The Magicians by Lev Grossman (Plume, $16.00)
Openly riffing off of Harry Potter and Narnia, Grossman also borrows liberally from the hothouse world of Ivy League scholars and privileged, post-college Manhattanites figuring out how to grow up. Great entertainment.

Fun Home by Alison Bechdel (Mariner, $13.95)
A memoir in graphic form that belongs on the shelf next to Maus and Persepolis; Bechdel draws and writes a densely literary meditation on her father's closeted life and death and her own coming out.

Posted by Big Blue Marble Web at 1:11 PM No comments: