Five Books That Prove Erica is a Cheater 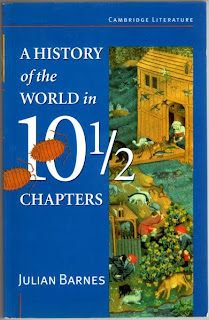 I am a big, fat cheater. Maybe you’d already figured that out. I’ve already confessed to snooping through people’s personal effects and reading the last lines of a book first, so this really shouldn’t surprise you. This month I’ve figured out a way to cheat this staff pick list. I’ve had someone else do the work for me, some poor unsuspecting volunteers at Housing Works Bookstore Café in New York. I snowed ‘em with the old, “I’m looking for a book. I don’t remember what it’s called or who wrote it but I think the cover was yellow and it might be about dogs’ butts?” Works every time. Give it up for evil genius, folks. Henceforth you may call me Madame Dastardly.

A History of the World in 10½ Chapters by Julian Barnes (Vintage, $15.95)
Lot of chit-chat lately about Barnes, who just won the Man Booker with The Sense of An Ending. HoW10.5 finds him being a bit of an experimental smarty-pants. Yeah, the road to the Booker is choc-full of literary landmines.

The Good Man Jesus and the Scoundrel Christ by Philip Pullman (Canongate, $14.00)
A tale of two Jesuses. It’s the classic good twin/bad twin plot meets the classic Messiah plot. If you’ve read Pullman’s His Dark Materials trilogy then you know he’s not afraid to manhandle the man upstairs.

Queen of the Damned (Vampire Chronicles Book 3) by Anne Rice (Ballantine, $7.99)
Before there was Stephenie Meyer, there was Anne Rice, and her vampires knew how to do stuff like have sex before marriage because nobody who’s going to live for eternity wants to wait for eternity to get laid. I’m just sayin’.

Uncommon Grounds: The History of Coffee and How It Transformed Our World by Mark Pendergrast (Basic Books, $19.95)
Pendergrast is also known for his unauthorized history of Coca-Cola titled For God, Country, and Coca-Cola. Note to Pendergrast: stop making me feel bad about the things I like to drink.

Pale Fire by Vladimir Nabokov (Vintage, $15.00)
Yep, the obligatory Nabokov entry, because New York can’t get caught with its pants down when it comes to literary prowess.

Last night we welcomed authors Delia Sherman and Catherine Gilbert Murdock to the Big Blue Marble to read and discuss their newest books. What a fabulous event it was! I'd read both books in advance and was eagerly anticipating hearing them read aloud. 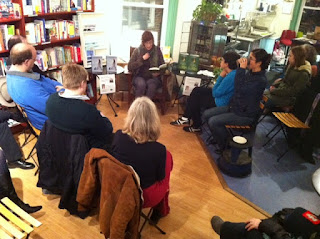 Delia's The Freedom Maze is middle grade/YA historical fiction, with a protagonist who longs for a storybook adventure and wishes herself back in time, from 1960 to 1860, where she is taken for a slave on her own family's ancestral plantation. The book offers a tribute to earlier children's literature -- Delia said she felt she was "writing back" to Edward Eager and E. Nesbit -- and I had made a display showcasing several of those earlier books. So I was gratified to hear her read the section that named them, following up with the obligatory transformation scene into the past. Beautifully read, with effortless accent transitions. 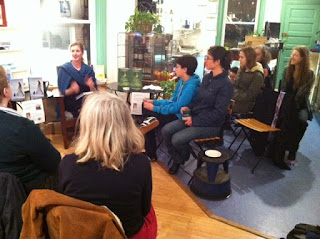 In contrast to this earnest exploration of an evolving view of racial ambiguity, Wisdom's Kiss is something of a silly romp through mill ponds, castles, and kingdoms. "I laughed out loud writing this book," Catherine told us. She wrote it in epistolary form, with eight points of view, including an encyclopedia and a play, along with various letters and journals. Delightfully, she read us one of the encyclopedia entries, imbued with an arch know-it-all tone of superiority. "Of course, the encyclopedia is the least accurate point of view," she added later. She followed this with a letter describing one of the important meetings in the emotional core of the book -- ostensibly a romantic triangle, but also, to me, a means to allow the characters to learn what they do best, despite external pressures, and how much satisfaction that eventually gives them.

The audience was enthusiastic and posed lots of insightful questions, ranging from external allusions to internal audiences, and the ages of the authors' inner children. We discussed cover images (both authors liked theirs!), gender-based marketing, and other aspects of publisher politics: at one point, Delia described a request from a previous editor that she make the white people nicer. "I'd made them as nice as I could," she said pointedly. 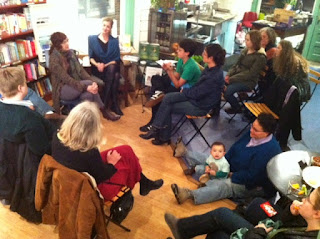 Delia and Catherine had shared a reading once before, at which we (and they) marveled at the excellent real-time demonstration of a wide range of writing styles and writing process. This time the discussion was laced with moments of curious confluence -- such as the discovery that both books grew from dream images. Delia described a dream of looking up from a book that was writing itself and seeing outside not her own garden but a garden maze. Catherine described a fabulous hot air balloon with acrobats performing inside. She had mentioned earlier that the Globe D'Or had been a sustaining image for her, an anchor to keep her writing during the development process. Both authors, it turned out, had spent a long time on these books -- one on a scale of years and one of decades!

And glad we are that they persevered.

Reading through The Freedom Maze (see below) in preparation for a visit from Delia Sherman in mid-November, I was put in mind of other engaging books I'd read recently that took place in times of slavery, and the similarities and differences winding along their plot threads. Here are four books of historical fiction (two with time travel) and one of nonfiction, ranging from young adult novel to kids' picture book. Excellent, powerful reads!

A Wish After Midnight by Zetta Elliott (AmazonEncore, $12.95)
Gemma, age 16-17. Lives in a rough part of Brooklyn in 2001, transported back to Brooklyn in 1863, where she works for a white abolitionist doctor and his family and must decide just how free she really is.

The Freedom Maze by Delia Sherman (Big Mouth House, $16.95)
Sophie, age 13-14. Lives in Louisiana in 1960, transported back to her family’s cane plantation in 1860, where she is unexpectedly taken for a slave and must work out how to complete the story whose ending will send her home.

Chains by Laurie Halse Anderson (Atheneum, $6.99)
Isabel, age 13. Raised in Rhode Island, resold with her sister to Manhattan, where she works for a loyalist family just before the Revolutionary War and must determine whether either side stands for her family or her freedom.

Elijah of Buxton by Christopher Paul Curtis (Scholastic, $7.99)
Elijah, age 11. First child born free in Buxton, a (real-life) settlement of former slaves in Ontario, Canada, where he works to lose his “fra-gile” image and must decide whether to travel south across the border to help a friend.

[Note: Elijah of Buxton also has a Staff Pick review on our website.]

Henry's Freedom Box by Ellen Levine (Scholastic, $16.99)
Henry “Box” Brown. Raised in Virginia, mails himself to freedom in Philadelphia in 1849 in, yes, a box, where he must keep very very still.

November 2011, Jennifer Sheffield
Posted by Jen at 3:55 PM No comments: