Micah's Five Picks at Almost 2, According to Jen

[Editor's Note: We're squeaking this list and the previous one in just under the wire before another parent of a Micah joins the staff in April...] 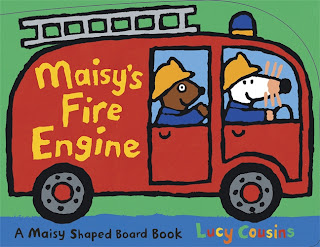 Maisy’s Fire Engine by Lucy Cousins (Random House, $5.99)
Full of exciting noises, action, and heroism (and a cat), Maisy’s Fire Engine was one of the first books Micah learned to recite in call and response fashion: “Maisy and Cyril are driving the fire engine today./Nee-nah, nee-nah!/Time to check the water./Swoosh!” In fact, fire engines have remained “nee-nah” trucks, even as the book has passed out of rotation. Meanwhile, Micah continues to love Maisy, especially in the lift-the-flap books like Ha ha, Maisy! and Where Is Maisy? (which I particularly like because of the line "Is Maisy in the closet? Nope, not here!")

Go, Dog. Go! by P.D. Eastman (Random House, $8.99)
One of my own childhood favorites, Go, Dog. Go! combines short, patterned sentences with expressive illustrations that Micah loves. Dogs big and small, up and down, wearing hats, or driving to the big dog party at the end. The book also reduced Micah’s frustration when we stopped the car at intersections: “Stop, dogs. Stop! The light is red now,” I’d explain, followed by the eponymous “Go, dogs. Go! The light is green now.”

Brown Bear, Brown Bear, What Do You See? by Bill Martin, illustrated by Eric Carle (Henry Holt, $7.95)
One of our toddler books says that kids learn their colors around age 3 or 4, unless the parents have specifically focused on them. Which I guess we have… This is not where Micah learned color names, but it has been an excellent book for practicing, with bright, bold pictures and an enticing question/answer format.

Richard Scarry’s Best Word Book Ever by Richard Scarry (Random House, $15.99)
Micah has recently become excited about big books with lots of things on a page. Richard Scarry is great for that, with detailed illustrations and cute animals, and to my old copy of Best Word Book Ever (which we must soon replace with the modern, less sexist version) we have recently added Cars and Trucks and Things That Go, which leaves Micah screaming with laughter at the crazy vehicles and their upsets.

I Spy: Super Challenger by Jean Marzollo & Walter Wick (Cartwheel, $13.99)
Another big book with lots of things on a page! Each page is a photograph of an elaborate array of toys and other objects, arranged in a pattern or randomly strewn, or riding along winding and criss-crossing paths. Micah can sit and stare at it for hours. Okay, not hours; he’s a toddler. But it feels like hours to me…

Micah's Five Picks at Almost 2, According to Nif

[Editor's Note: We're squeaking this list and the following one in just under the wire before another parent of a Micah joins the staff in April...] 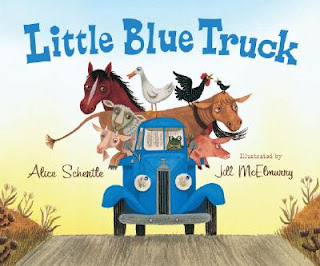 Little Blue Truck by Alice Schertle (Houghton Mifflin Harcourt, $6.99)
It's like someone asked Micah how the perfect book should go. Animal noises, catchy rhymes, AND the protagonist and hero is a TRUCK. I'm on my way to memorizing this one, and Micah is too. He has reached the point where he can fill in the rhymes when he knows a book, even if the word isn't in his active vocabulary. So much fun!

Sheep in a Jeep by Nancy Shaw (Houghton Mifflin Harcourt, $6.99)
Sheep in a Jeep features tongue-twisting short rhyming lines, plus a BROKEN TRUCK. Micah says "Boo hoo!" in the saddest, most sympathetic tones. What's not to love?

Little Bear by Else Holmelund Minarik (1920-2012), illustrated by Maurice Sendak (1928-2012) (HarperCollins, $3.95)
We lost two bright lights in childen's publishing this year. Little Bear is an enduring classic, and Micah loves both the illustrations and the story. Early readers are awesome for toddlers, because the limited vocabulary helps them to follow more complicated story lines.

Listen to My Trumpet by Mo Willems (HarperCollins, $8.99)
I have been WAITING and WAITING for the day Micah would learn to appreciate the GENIUS synergy of Elephant and Piggie. THAT DAY IS FINALLY HERE. Any and all are wonderful, but we particularly like Listen to My Trumpet because Micah has a trumpet-playing grownup friend. The ridiculous trumpet noises are a fun read-aloud challenge.