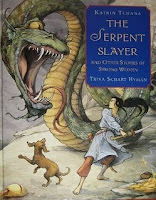 The Serpent Slayer by Katrin Tchana, illustrated by Trina Schart Hyman
Stories of brave, clever, stalwart, and fierce women from all around the world, stirringly retold with rich illustrations by a mother-daughter team.

Nelson Mandela's Favorite African Folktales,
chosen by Nelson Mandela
Stories from all around the continent, both classic and contemporary, each one retold and illustrated by a different team. The audiobook (available at emusic or iTunes) is also wonderful. An all-star collection in every format.

The Little Book of Hindu Deities by Sanjay Patel
Super-appealing, color-saturated pictures of each deity created by a Pixar-studio animator, each with an explanation of the god or goddess's place in the pantheon.

Trickster, edited by Matt Dembicki
Graphic-novel format retellings of trickster stories from different Native American storytellers, including traditions from across North America. (We're still waiting for this one to come in, but we're including it because it looks awesome!)