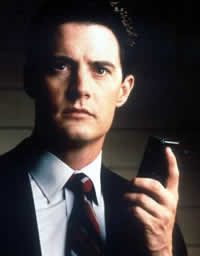 Horoscope, Week of April 16—When You Stare into the Cusp, the Cusp Stares Back

Aries: Congratulations! You share a sign with Agent Dale Bartholomew Cooper (April 19, 1954) from Twin Peaks, who said "Harry, I'm going to let you in on a little secret. Every day, once a day, give yourself a present. Don't plan it, don't wait for it, just let it happen. Could be a new shirt at the men's store, a catnap in your office chair, or two cups of good, hot, black coffee. Like this." Take advice from this or any other fictional character.

Taurus: Jon Sands says he reads horoscopes this way:“1) My horoscope, 2) Exes' in chronological order.” Nostalgia is a necessary game. Google all of your exes and familiarize yourself with everyone who shares their names. Almost everyone's name is common. Common's isn't. Except that it is.

Gemini: My sister likes websites where everything's kind of a mess: Cake Wrecks, Regretsy, Awkward Family Photos. I think this would make a good religion. This week, Katie, there are a lot of misspelled cakes: ”American History Celebrating Afraica,” “Back to Schol,” We apricate you.” I hope I proofread Gemini better than they proofread frosting...Lets hang in there for Sunday Sweets.

Cancer: Jessica Simpson is trying to be the Anthony Bourdain of the beauty myth, or Chris Rock for the honky set. (Watch Good Hair!) Everyone has her own sodium hydroxide. Each week, Jessica sits down with a woman whose face got ruined. Let yourself be your own kind of beautiful, because Jessica is coming.

Leo: Giggle during meditation. Make out at inappropriate movies, like Seinfeld did. Drink out of a Styrofoam cup. Eat nothing but junk food for 30 days, but not to prove a point or anything. But don't text while driving, dear, I love you too much for that.

Virgo: You're getting warmer. Sparks are starting to fly from the ends of your hair. Nearby marshmallows are pleasantly exploding, turning the house to cotton candy. There's only one way out, and it's melting on the tip of your tongue.

Libra: Quick! When your phone buzzes, who do you hope it is? Plan some secret installation art for that person, using one or more of the following materials: dried delphiniums, all-holiday tinsel, dollar store dishes, crepe paper, that salt-dough sculpting stuff from when we were kids, seashells, grass seed, sand.

Scorpio: You may want to Hulu Lost for this one... (And SPOILER ALERT!) So it turns out, the whispers in the leaves are people who can't move on. If they blow up the plane, go to the Hydra Station and hijack the submarine. There's no time to build another raft, just get the heck off the island, Scorpio.

Sagittarius: Spinoza said something like, if God is everything, then there's nothing that isn't God. Around the time I was learning this, I was into a show called Joan of Arcadia, wherein an ordinary high school girl got missions from said deity, who appeared as ordinary humans. She got an assignment from Her/Him every week. Then it turned out she had lyme disease, but anyway, when I was watching that show, I wouldn't have expected to ever meet anyone from the cast. Now Amber Tamblyn is a friend of some friends. This oddly gives me faith. Synchronicity can be surprisingly arbitrary, but neat.

Capricorn: Your heart is a Michael's. I come back to you whenever I run out of notecards. Let's learn the names of Martha Stewart's colors (Tea Bath, Firmament, Scented Notepaper...), choose the best turn of phrase, and buy that four dollar glitter. I'm trusting you to scrapbook everything.

Aquarius: I thought of a good one for you while I was trying to fall asleep last night. I should have gotten up and written it down. Have a little funeral for all of the ideas you've lost this way, through carelessness, dismissal, or sleep. Burn origami boats for them, on safe rivers. Put a notebook on the nightstand.

Pisces: No good will come of a story that starts “Ask them to smell this, see if it's still good.” You have no choice but to clean out the refrigerator alone, but don't worry. There'll soon be room for everything you want. If you're an Empty Fridge Person, please at least think about produce.

Jane Cassady is the booking maven for the Philadelphia Poetry Slam. She has appeared in The November 3rd Club, The Comstock Review, Valley of the Contemporary Poets, and other journals. She has performed at such venues as LouderArts in New York City, Valley Contemporary Poets in Los Angeles, and The Encyclopedia Show in Chicago. She has taught poetry to all ages from pre-K to adult, and believes in coaxing out everyone's unique poet voice. Check out her Time to Write poetry class starting on Tuesday, April 20 at Big Blue Marble Bookstore.