Erica’s Five Books for May: This Ain’t Your Preteen’s Vampire

Saddened and affronted by the fact that the modern vampire mythos has been hijacked by Stephenie Meyer and the CW television network? Below are five selections for readers in search of vampire tales with teeth—er, fangs.

1. Abraham Lincoln: Vampire Hunter by Seth Grahame-Smith (Grand Central Publishing, $21.99).
It turns out that Honest Abe, our 16th President, wasn’t so honest after all. Mr. Grahame-Smith has stumbled upon Lincoln’s secret journals, which reveal his secret life as a vampire hunter. This sly, funny and fast-paced work of fiction reads like an historical biography in the vein of David McCullough, primly citing “primary source material” that documents the horrors of vampirism and one man’s quest to free the nation from its cold, bony, grasp. It’s Buffy the Vampire Slayer meets Team of Rivals. To quote another famous president: I cannot tell a lie. I loved it. 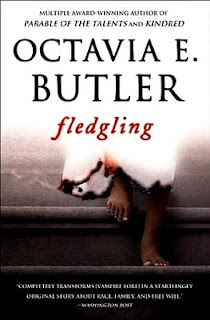 2. Fledgling by Octavia E. Butler (Grand Central Publishing, $13.99).
Two words: black vampire. I don’t mean like “black is the night” or “black is my soul” or some sort of weird poetic expression. I mean that the protagonist, Shori, is an evolved form of vampire who, due to the increased melanin in her skin, is able to walk about during the day. Brilliant, right? It seems the pale, ghostly, alabaster-skinned vampires who run rampant across the landscape of Western fiction are at a disadvantage since most of them tend to flame up at the first hint of sunlight. Butler explores the politics of otherness and what it means to be human in this gripping read that presents a refreshingly original take on the vampire legend.

3. The Historian by Elizabeth Kostova (Back Bay Books, $15.99).
I’m going to warn you, the title of this book says it all. It’s a vampire tale couched in the form of an academic investigation. It’s more likely to inspire you to return to grad school than to hang garlic from your window sash. The protagonist scours libraries and historical archives for maps and ancient manuscripts which provide clues to the mystery of a dear friend and mentor’s disappearance. Research leads the way. There is a lot of conversation, a lot of intellectual foreplay, and a journey which crisscrosses Eastern Europe. Yet, as the mystery unfolds so too does the truth about one famous vampire in particular: not only does Dracula have a penchant for blood, it turns out he’s a fan of books as well.

4. Dracula by Bram Stoker (Signet Classics, $4.95).
You probably know what this one’s about even if you haven’t officially read it — or at least you think you know. I saw several movie versions before I got around to actually reading it. I had the impression it was about a vampire count with a grudge, a horrendous accent and a cape. Boy was I wrong. I mean, I don’t think Stoker mentions the cape even once! There’s Dracula and Van Helsing and all that, but really the book is about this poor working stiff named Harker who has to follow up on the signing of some really boring papers in Transylvania because the first guy to try to do this job went bonkers. You know how it is when you’re at work just trying to make a dollar out of fifteen cents and your co-worker calls in sick and then you get his crappy assignment? That’s kinda what Dracula is about: getting really screwed by a co-worker. All I’m saying is read it. You’d be surprised how much you identify with it. Not unlike my life, this book somehow manages to walk that fine line between the gothic and the mundane.

5. Lord of the Dead by Tom Holland (Pocket Books, $22.95).
There’s a reason Caro Lamb once called Lord Byron “mad, bad and dangerous to know” — it’s because he was a vampire. Author Tom Holland recognizes that anyone as reputedly wicked as Byron had to have been playing for Team Undead. Basically, it’s the life of Byron as a vampire with events in the book mirroring actual biographical events. Byron’s world-weary voice, leads us through the narrative, reflecting on his travels and his struggle against the mysterious Vakel Pasha, the adversary who transforms him from man to fiend. I felt totally smart reading this because I remember Lord Byron from high school English class and have spent the better part of my adult life thinking of my boyfriends as Byronic heroes when really they were just socially inept.
Posted by Jen at 12:24 PM