Five books of familiar and unsung heroes. The first three -- all focused on women's work -- are brand new as of this summer and this month. The other two, celebrating African American inventors and Jewish-American heroes, have been around for a while, with the latter expecting a re-release in 2017! 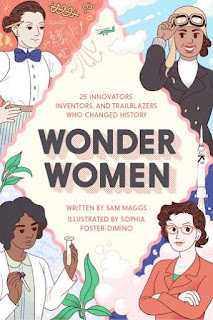 Wonder Women: 25 Innovators, Inventors, and Trailblazers Who Changed History by Sam Maggs (Quirk Books, $16.99)
I will mention that this book in fact contains far more than 25 people. It's just that some of them get in-depth coverage, while others get a paragraph. There are also interviews with living figures in each field. The writing is sharp and quirky, and it's a lot of fun.

Women in Science: 50 Fearless Pioneers Who Changed the World, written and illustrated by Rachel Ignotofsky (Ten Speed Press, $16.99)
Don't think it's all just Marie Sklodowska Curie.
It's got cool illustrations, so it lives in the graphic novels section of the store.

Rad Women Worldwide: Artists and Athletes, Pirates and Punks, and Other Revolutionaries Who Shaped History by Kate Schatz, illustrated by Miriam Klein Stahl (Ten Speed Press, $15.99)
Another release by the duo who created store-favorite Rad American Women A-Z: Rebels, Trailblazers, and Visionaries Who Shaped Our History...and Our Future! -- which I particularly love because U is for Ursula (K. Le Guin). Happy birthday to her, by the way. (-:

What Color Is My World? The Lost History of African-American Inventors by Kareem Abdul-Jabbar and Raymond Obstfeld, illustrated by Ben Boos and A.G. Ford (Candlewick, $5.99 paperback, $17.99 hardcover)
Hey, I had not realised that Kareem Abdul-Jabbar had just been named US Global Cultural Ambassador (by Secretary Of State Hillary Rodham Clinton) at the time this book first came out. Cool. Two kids learn about the contributions of African American inventors to fields like open-heart surgery, telecommunications, blood banks, and more.

Portraits of Jewish-American Heroes by Malka Drucker, illustrated by Elizabeth Rosen (Dutton hardcover $22.99, paperback forthcoming from Puffin in January)
From Harry Houdini to Albert Einstein, from Bella Savitsky Abzug to Ruth Bader Ginsburg, from Emma Lazarus to Michael Schwerner and Andrew Goodman... I know a lot more of the names profiled in this book than in the others, but some are still new to me.