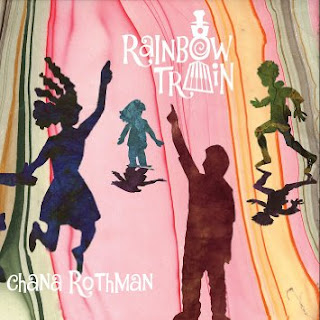 We are excited to announce the recent arrival of Rainbow Train, a CD of songs of gender liberation, created by local teacher and musician Chana Rothman. Chana was Micah's music teacher from 18 months until about age 3, and, along with her music and musicianship, I always loved the care and deliberation evident in her song choices and their presentation in class.

Next stop: free to choose; next stop: we've got love coming through...

One of the albums I loved growing up was Free to Be You and Me, with its fabulous and memorable songs and sketches celebrating friendship and cutting down gender stereotypes. So I was looking forward to sharing it with my own child...until I listened to it after he was born. Some songs had stood the test of time beautifully -- "Some Kinds of Help," "Glad to Have a Friend Like You," not to mention the title song itself. But in listening to many of the other songs, I found they were more likely to introduce the very stereotypes they were created to dispel. It seems we have moved forward since the '70s!

So then I was excited to learn, during one of our periodic post-music-class discussions of gender and language and music, that Chana was working on a project to create a musical update, of sorts, and to move the conversation even further along. And now, only a couple years later, we have an album full of fabulous and memorable music that celebrates being who you are, gender as a spectrum, rejecting gender stereotypes, being in charge of your own body, forging and standing up for your own identity, and transformation!

Next stop: turn another whirl; you don't have to be just a boy or a girl; you can be a beautiful blend and swirl...

Throughout the album, Chana works to transcend some of the difficult lines between rejecting a gender binary altogether (gender as rules imposed from outside) and recognizing/crossing it (gender as identity). One of the ways she does this is by focusing on kids and their own sense of self.

One of the most haunting songs on the album is "Holy," with an ethereal melody and a plea for letting people grow up to be their own amazing selves. One of Chana's friends (and a fellow music class attendee) compiled a beautiful photo-montage video with this song, to celebrate her own child's gender experience. (You can see the video at the end of a Huffington Post blog article Chana wrote about some of her experiences that inspired the Rainbow Train project.)

The other songs on the album continue this theme of letting kids (or anyone!) be who they are, as long as they're not hurting anyone. This includes playing what they want to play, liking what they like, and also trusting their own ideas of who they are. There's a strong focus on bodily autonomy, from "Your body is your own; you can decorate it how you like" to "Everybody gets to choose their own name" to "My body is mine, each and every day".

Next stop: pink and blue; anyone can wear these colors, it's true...

One thing I love about Rainbow Train is the way it responds to hurtful language without privileging the actual bullying and instead by getting to its root.

Free to Be You and Me has a song called "William's Doll," in which William persists in requesting a doll to love despite the dismissive or disparaging things his family tell him. This song has a corollary in Rainbow Train with the poem "Boy in a Dress". The new poem similarly presents different people's reactions, including a bullying kid, but, unlike the Free to Be song, the bully's reactions here are presented by providing the subtext ("I'm scared and confused, so I'll be mean to you"), rather than by saying any of the mean things out loud.

Earlier, in the song "Gender Blender," Chana suggests specific responses to hurtful things that people may say, either deliberately or without understanding:
"If they say, 'That truck's for boys,' say, 'Anybody can use this toy!'"
"If they say, 'Only girls wear pink', say, 'A color's just a color, don't you think?'"
"If they say, 'Girls look like this', say, 'There are more ways to be a girl than I could list!'"
"And if they tell you who you're gonna be, say, 'Thanks, but actually, that's up to me!'"

And, finally, she presents all sorts of encouraging/affirming comments directly from the mouths of actual kids: "There's no such thing as boy colors and girl colors." And "Anyone can play sports, no matter who you are, no matter how old you are."

The album has something in it for everyone. Along with its songs about kids and growing up, there's a welcome baby song (one of my favorites), and even a piece called "In Utero". There's a song that introduces Rosa Parks and Harvey Milk and links their struggles to those in the present. Folk songs, rap songs, lyrical, and laid-back songs.

Rainbow Train is certainly a sensation in my own household. Released in May, it stayed on nearly constant play in the car for two months. My four-year-old has worked really hard at learning the songs and the words -- something he's only done quite as consistently with the soundtrack to Cats. So, you know, it's (almost) "Better than Cats!" He sings along and asks me to join in, and then later, even on songs where I haven't heard him sing, he can fill in lines I've forgotten.

Next stop: tell us who you are; next stop: shine your star; next stop: we've come so far, riding on the Rainbow Train...

The album is also excitingly home-grown: Chana collaborated with numerous musicians from the neighborhood. A number of local kids appear as well, shouting "Rainbow Train!" at the beginning, or singing in the songs, or providing their own experiences and wisdom. And there were music and dance parties along the way, to which everyone was invited -- such an amazing amount of community support.

So take my hand, come along, and take a ride on the Rainbow Train!

See also Chana's Rainbow Train Resources on her website.
If you're not local to Philly, you can also order the cd/songs from cdbaby.
Posted by Jen at 2:30 PM