Celebrating Multiracial Families and Friendships: A List of Books for Kids and Teens

This past April, at the Mt. Airy Kids' Literary Festival, we welcomed Tanya Hutchins, author of Born Beautiful Biracial: A Compilation of Children's Essays, and Mt. Airy author Lori Tharps, creator of ?RU! t-shirts (for sale in the bookstore!), to facilitate a fascinating discussion dealing with the "What Are You?" questions that many people who grow up biracial or multiracial regularly face, as well as issues around who is perceived as family.

Here's a list of books we started compiling then, that address these questions in some way. Some feature multiracial families; some feature strong interracial friendships. Others celebrate the wide diversity of skin tones and other physical features among people of different races and cultures. It is, of course, only a small subset of all such books, though I expect it to grow over time. At the end is a list of links to other lists and resources, with even more books to explore.

Within each section below, the books are arranged chronologically, to give a sense of how things have evolved over time. An asterisk * marks a book in which multiracial/multicultural identity is incidental and not central to the story. (If I don't know or am not sure how to characterize it, I've left it off.)

Talking with kids about race:

The Skin I'm in: A First Look at Racism by Pat Thomas, illustrated by Lesley Harker (2003)
Let's Talk About Race by Julius Lester (2005)
The Skin You Live In by Michael Tyler, illustrated by David Lee Csicsko (2005)
Born Beautiful Biracial: A Compilation of Children's Essays (by children ages 6-14), compiled by Tanya Hutchins (2014)

Board books for babies and toddlers: 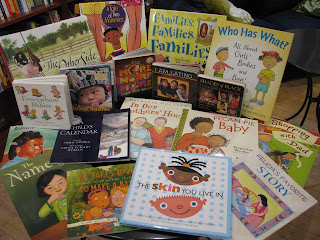 *All Families Are Special by Norma Simon, illustrated by Teresa Flavin (2003)
The Family Book by Todd Parr (2003)
*The Great Big Book of Families by Mary Hoffman, illustrated by Ros Asquith (2010)
*Who Has What? All About Girls' Bodies and Boys' Bodies by Robie Harris (2011)
*What Makes a Baby? by Cory Silverberg, illustrated by Fiona Smyth (2012) [This book separates the genetic/biological components from the emotional component of making a baby, thus allowing for nontraditional families.]
*Living with Mom and Living with Dad by Melanie Walsh (2012)
*It Takes Love (and Some Other Stuff) to Make a Baby by L.L. Bird, illustrated by Patrick Girouard (2014) [Two-mom family using donor insemination.]
Families, Families, Families! by Suzanne Lang & Max Lang (2015)
One Family by George Shannon, illustrated by Blanca Gomez (2015)

*The Circle of Magic series by Tamora Pierce, starting with Sandry's Book (1997)
Crossing Jordan by Adrian Fogelin (2000)
Millicent Min, Girl Genius by Lisa Yee (2003)
*The True Meaning of Smekday by Adam Rex (2007, basis for the 2015 DreamWorks movie Home)
*The Popularity Papers series by Amy Ignatow, starting with The Popularity Papers (2010)
*The Flower Power series by Lauren Myracle, starting with Luv Ya Bunches (2010)
The Lions of Little Rock by Kristin Levine (2012)
The Whole Story of Half a Girl by Veera Hiranandani (2012)
My Basmati Bat Mitzvah by Paula J. Freedman (2013)
*The Misadventures of the Family Fletcher (2014) and The Family Fletcher Takes Rock Island (2016) by Dana Alison Levy
[Note: The asterisk here refers to the first book; the sequel does deal with race as a significant, though plot-secondary, issue.]
The Blossoming Universe of Violet Diamond by Brenda Woods (2014)
*Absolutely Almost by Lisa Graff (2014)
Unusual Chickens for the Exceptional Poultry Farmer by Kelly Jones, illustrations by Katie Kath (2015)
Ghosts by Raina Telgemaier (2016)
Threads by Ami Polonsky (2016)
The Lotterys Plus One by Emma Donoghue, with illustrations by Caroline Hadilaksono (2017) 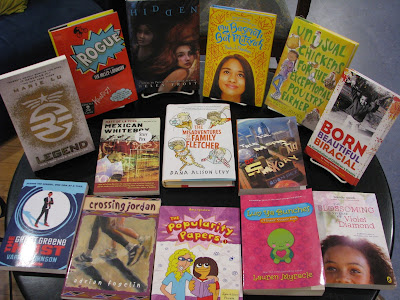 I Hadn't Meant to Tell You This by Jacqueline Woodson (1994)
From the Notebooks of Melanin Sun by Jacqueline Woodson (1995)
If You Come Softly (1998) and Behind You (2004) by Jacqueline Woodson
Whale Talk by Chris Crutcher (2001)
Mexican Whiteboy by Matt de la Peña (2008)
Liar by Justine Larbalestier (2009)
*The Legend trilogy by Marie Lu, starting with Legend (2011)
*Hidden by Helen Frost (2011)
Eleanor & Park by Rainbow Rowell (2012)
Endangered by Eliot Schrefer (2012)
*Rogue by Lyn Miller-Lachmann (2013)
*The Great Greene Heist by Varian Johnson (2014)
Kaleidoscope: Diverse YA Science Fiction and Fantasy Stories, edited by Alisa Krasnostein & Julia Rios (2014)
Lies We Tell Ourselves by Robin Talley (2014)
Black Dove, White Raven by Elizabeth Wein (2015)
Fans of the Impossible Life by Kate Scelsa (2015)
Everything, Everything by Nicola Yoon (2015)
An Infinite Number of Parallel Universes by Randy Ribay (2015)
Peas and Carrots by Tanita S Davis (2016)
*Holding Up the Universe by Jennifer Niven (2016)

Some other lists and resources:

-----
*An asterisk marks books in which multiracial/multicultural identity is incidental and not central to the story. If I don't know or am not sure how to characterize it, I've left it off.