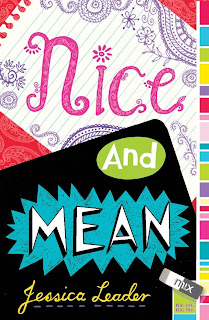 Hi there, Jess! Delighted to have you here with us today. There are so many things I love about your Middle Grade book, Nice and Mean. Before we gt started, here's a quick plot synopsis:

Marina is mean. Sachi is nice. Marina is Barney's. Sachi is Burlington Coat Factory. It's bad enough that they have to coexist in video class—but now they're being forced to work together on the big semester project. Marina's goal? Expose her wanna-be BFF as a fashion wanna-be to the entire middle school. Sachi's goal? Prove that she's not just another honor-roll Indian student and get people talking. Work together in harmony? Yeah, that would be no. How can Sachi film something meaningful, and Marina, something fabulous, if they're yoked to each other?

One of the many things I love about your book is how it directly addresses power dynamics in female social structures in an authentic way. While reading the book, I had many flashbacks to my own middle school experience and many of the characters also bring to mind kids I worked with professionally. What first moved you to write this story? Was it a story that was brewing in your mind for a long time or did it come to you all at once?

Oh yes, the characters in this story were with me for a while before I wrote it. It actually grew out of another, justifiably shelved novel that focused on—I doubt you’ll guess—Sachi’s new friend Lainey, who is now relegated to the sidelines. (Sorry, Lainey. Hopefully, readers like you anyway.)
After I finished that story, I knew I wanted to continue with Lainey’s world, and I thought I might focus on Marina. Why was she so mean? I wasn’t sure that was enough for a whole novel, but I was also intrigued by the character of Sachi, who had been inspired by an Indian-American student I’d met while student-teaching. The real-life girl was competent, charming, and admired by all, but I wondered if her classmates really knew her, and I wanted to explore that side of her further. Then I hit on the idea of having Sachi and Marina being forced to work together on something they both cared about a lot—a video that could possibly change how people saw them—and voila, Nice and Mean.

Yes, such a good idea to have them work together on a project. Another thing I really love about the book is that these two very different girls collaborate on a creative endeavor. As a writer, I do feel like I can make a creative connection with someone who is also a writer, even if we don’t have much else in common. Did you know that the Video class was going to be so central to the book from the beginning?

Definitely. There was no way that alpha-girl Marina would have much to do with rule-abiding, gold-star Sachi unless they had a project yoking them together. When I hit on the idea of them being assigned as partners in a video class they have a lot invested in, I knew I had the engine for my story.

A third thing I just love about this book is Marina’s voice. I just really admire that you could write such an initially unlikeable character in an honest way that somehow makes her sympathetic without completely changing her or losing her essence. What was it like to write her voice? I imagine more difficult than writing Sachi’s, or no?

Oh, it was way easier to write in Marina’s voice! Think of it: she’s almost unabashedly obnoxious! Who doesn’t want to let all those zingers fly every once in a while? “Mascara boogers!” “Don’t forget to order a life!” Not only was it easy to come up with those lines; it was fun. Thank you for saying that she’s likable, though. I struggled with that in the early stages, until one of my grad school advisors tasked me with making her more sympathetic. It was a big revelation to me that we need to make our characters vulnerable in some way in order to make the reader like them (thank goodness I went to grad school!) Marina’s vulnerabilities, sadnesses and shortcomings had been clear to me as the writer, but I needed to get those on the page for the reader. I’m glad that it worked for you.

It definitely did. I did care a lot about both girls and, actually, Elizabeth stuck with me a lot after I read the book. In a way, to me, Elizabeth is the bravest character in the book and she is the one who Marina cares the most about. Have you ever thought about writing Elizabeth’s story?

I never thought of her as being the bravest! She certainly is brave in calling Marina on her drama. No one close to her does that. As for writing a story that focuses on Elizabeth—I consider Elizabeth to be the double of Sachi, just as Sachi’s prickly friend Nicole is a sort of double of Marina (don’t you often see nice people with prickly friends and outright mean people with the nicest girls in the class? It has baffled me for decades.) Anyway, since I feel like I have already explored the plight of the pleaser in Sachi’s chapters, I never considered writing from Elizabeth’s point of view. I’d love to hear if you have anything in mind, though. You could find yourself with a very big Special Thanks…

Ha, okay. I will keep that in mind. Maybe it could be a few years later and these girls could be in high school, and . . .
Okay, back to the interview:
Have you had any reader response to this story that has surprised you?

I’m always surprised when people speculate which character I am more like, Marina or Sachi. They almost always guess wrong. (I’ll never tell!)

Are you working on any projects now?

Mais oui. Let’s see what I’ll say about it…it’s a mystery in which I use the fact that Prince Charles has hired someone exclusively to draw his bathwater. It’s not a book about bathing, or Prince Charles, but there may be another, fictional prince.

1.      What were your 3 favorite books from childhood/teen years?
I suffered a major teenage book drought, but childhood favorites included:
Hail, Hail, Camp Timberwood by Ellen Conford (I was obsessed with going to camp)
And This is Laura, also by Ellen Conford (Laura was psychic!!)
No Flying in the House, by Betty Brock (which I must tell you that Amazon ridiculously characterizes as speculative fiction. It’s about an orphan who can fly, guys.)

2.      What are 3 books you’ve read recently that surprised you?
The Giant’s House, by Elizabeth McCracken (she narrates like the inside of my head!
Bomb: The Race to Build--and Steal--the World's Most Dangerous Weapon (Newbery Honor Book) by Steve Sheinkin (so much historical info made page-turningly compelling!)
A Visitor for Bear and its series by Bonnie Becker, illustrated by Kady McDonald Denton (The characters are so captivating! The lines are exquisite! I am surprised by the depth of my love for a picture book.) (Totally. I love this book and hand sell it all the time at the bookstore.)

3.      What are 3 books that influence/d your writing?
The Secret History, by Donna Tartt (moody, detail-rich, amoral)
The Boy Book, by E. Lockhart (true, succinct, funny and surprising)
J. K. Rowling’s Harry Potter books. (Yes, I know they’re blockbusters, but in the midst of these elaborate plots, Ron will say something gloomy or Hermione will lash the others with Hogwarts, a History, and I’ll just burst out laughing, then cry when something sad happens. Plus, Rowling never stops adding gems to her wizarding world, especially with food. Not many books can claim such richness.)

Thanks so much, Jess!

Thank you! I hope to visit you at The Blue Marble someday and buy all these great books you’ve been highlighting!!
__ 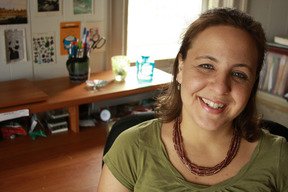 Jessica Leader is an author and teacher living in Washington, DC. Nice and Mean is her first novel. It won a spot on the American Booksellers' Association's Kids' IndieNext List, which called it "Well-written, insightful, and fun to read." It was also a CYBILs nominee and an SCBWI Crystal Kite finalist for the midsouth. It is all made up, except for the part about the apron. For more details, including this apron business, you can visit Jessica online at www.jessicaleader.com or on Facebook at https://www.facebook.com/jessicaleaderauthor.

Thanks for reading!!! If you're local to the area, please let the bookstore know if you would like to place a special order for NICE AND MEAN. You can email orders to orders [at] bigbluemarblebooks [dot] com, call (215) 844-1870, or come see us in the Mt. Airy neighborhood of Philadelphia at 551 Carpenter Lane.

On August 13th, come check out Jen's interview with Catherine Gilbert Murdock, author of the Dairy Queen series, including the forthcoming Heaven is Paved with Oreos.