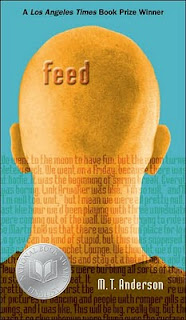 Feed is a dramatic and disconcerting futuristic look at the pervasive effects of the media on our brains and on society, and I'm looking forward to discussing it at our September Young Adult Book Discussion (Thursday, September 23, 7pm). The following exhortation doesn't appear in the story; it's from an interview with the author in the back of the book:

What would you say to kids today who are aware of being manipulated by the media? How can they avoid being sucked in?

First of all, I know that going against the norm can be very isolating. When I was a teenager, I listened to really obscure music. In some ways that isolated me, because teens tend to watch and engage each other very, very harshly when it comes to questions of taste. In fact, I think musical taste among teenagers is often more about self-definition than it is about the actual music.
Even so, I'm clearly in favor of trying to extend your knowledge into areas that are obscure and eccentric, as a way of exploring your self and your place in the world. Instead of responding to media messages by getting anxious -- thinking you need to get some piece of clothing that suddenly comes into fashion, or that you need to gain or lose weight or change your musculature in order to look like the romantic lead from some movie you've just seen -- start exploring all the peculiar corners of the world that are out there. Because that's the one thing the media does not encourage: a real sense of curiosity. Ultimately, in writing Feed, I wanted to say to kids who are already doubting what they see around them, "You already think in ways I'll never be capable of, and are dreaming things I can't conceive of. Keep it up. We're counting on you."