Nonfiction
The Boy Who Harnessed the Wind: Creating Currents of Electricity and Hope by William Kamkwamba and Bryan Mealer
(William Morrow and Co., $25.99)
In parts I find the way this book was co-written slightly annoying; however, it is a hugely inspiring tale of a young man who assembles a windmill out of discarded parts to power his Malawi village which had previously had little or no electricity.

Crow Planet: Essential Wisdom for the Urban Wilderness by Lyanda Lynn Haupt
(Little Brown and Co., $23.99)
The crow population has skyrocketed in recent years, partly as a result of urban sprawl. Crows are ever present in cities and suburbs (you may have also noted they are heavily featured in Nikki McClure's illustrations). Haupt investigates how crows are a sympton of the ecological damage wrought human civilization, but also a reminder of the wildness and wonder we should strive to protect. This book is a primer on urban naturalism and works to break down the false dichotomy between cities and nature.

Picture Books
The End by David Rochelle, illustrated by Richard Egielski
(Scholastic, $16.99)
This picture book inverts the classic fairytale form and the results are very silly.

Gracias/Thanks by Pat Mora
(Lee and Low Books, $17.95)
This is such a sweet book. I think my favorite line is "For my family, who clapped and clapped even when I tripped on the stage in the school play. Thanks." 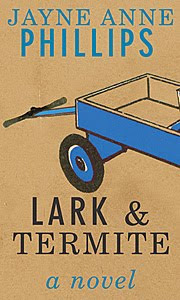 2. It was reviewed well by some great authors including Junot Diaz. It was also reviewed well by NPR.
3. I had just read some beautiful short stories by Phillips.
I read and loved this book and then when it came out in paperback it had an awful cover that makes the books seem really weepy and sentimental. So please remember the adage "Don't judge a book by its cover." This book is beautifully written and reveals Phillips' background as a poet, especially in her chapters written from the perspective of Termite--a boy with extremely limited mobility and abilities to communicate--who, as only Lark seems to understand, knows and perceives more than anyone else.