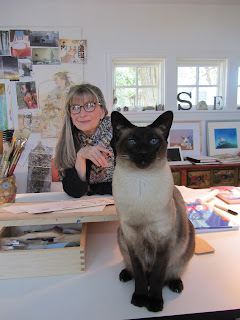 Judy Schachner was born into an Irish Catholic working class family from New England. Money was as tight as their apartment was tiny and though she may not have had the easiest of childhoods, she credits her imagination with helping her survive it.

She can’t ever remember a time when she was not drawing and like most budding artists she doodled on everything, including her father’s bald head. She drew herself into stories where she was the smartest in her class and into a family where mothers lived to be a ripe old age. In many ways, Judy feels that her own life has resembled the fairy tales she loved reading as a child, complete with a happy ending. And the best part of this author/illustrator’s story? She married a prince of a guy and they had two beautiful daughters and just like the mothers in her earliest tales, she plans on living to a ripe old age.

Described by the New York Times as “…something like the James Joyce for the elementary school – set…”, Judy Schachner is the #1 NY Times Best Selling Author/Illustrator of over 23 books for children including Bits & Pieces, the Skippyjon Jones series, Yo Vikings, The Grannyman and Willy and May. She has won many awards including the first E. B. White Read Aloud Award. 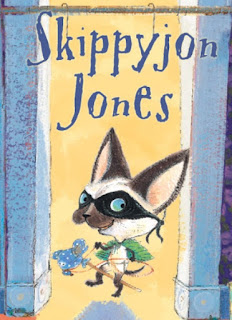 
Skippyjon Jones! Need we say more? Who would have guessed books about a Siamese kitten who dreams he is a crime-fighting Chihuahua could have won over a generation of parents and kids?

Whenever Judy visits the store her young fans come out in droves, so come early on the 20th to meet her and get your signed books!

Between now and then, you can feed your Skippyjon frenzy with these great webcasts of his adventures. 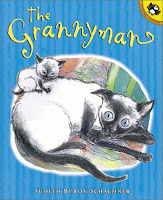 The Grannyman is one of Event Coordinator Elliott's favorite picture books ever  - that story of Simon, a very old cat who's just about ready to give up after a long and fulfilling life. But his family has a creative solution to get rid of Simon's doldrums: a new kitten! The unexpected companion lifts Simon's spirits and gives him lots to do and lots to look forward to. Simon's caring ways with the kitten earn him a nickname, and a place in the hearts of readers of all ages.

As much as she loves the book,though, Elliott does advise that getting her 16 year old cat a kitten did NOT create the inspiration for a sweet children's story.
Posted by Unknown at 7:28 PM