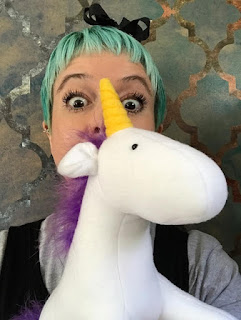 According to Dyckman, she was the type of child who always had her nose in a book. “And Band-Aids on my knees, ’cause when your nose is always in a book, you run into a lot of stuff,” she adds. Her favorite books from her childhood include Where the Wild Things Are by Maurice Sendak, the  Frog & Toad stories by Arnold Lobel, and the George and Martha stories by James Marshall.

“Something about highly-emotional characters and friendships despite differences appealed  to me even when I was little,” she says. Although Dyckman was always interested in becoming a children’s author, it wasn’t the first profession she tried. “I had a bunch of pre-author jobs ranging from serious assistant at a world-famous institute of higher education to not-so-serious costumed character,” she says. “I rocked Daffy Duck!"

Ame lives in central New Jersey with her family, ridiculously big-eared cat, book collection, closet full of hair dye colors, and of course, the characters from her stories. (For reals! She’s currently building a homemade swimming pool for the protagonist of her upcoming series, MISUNDERSTOOD SHARK—mostly so she can have her bathtub back.) 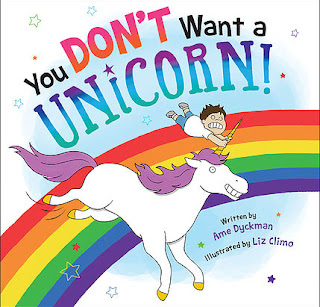 You Don't Want a Unicorn

When a little boy throws a coin in a well asking for a pet unicorn, he has no idea what kind of trouble he's in for. Unbeknownst to him, unicorns make the absolutely worst pets: they shed, they poke holes in your ceiling, and they make a big mess. With a knowing wink from Ame Dyckman, creator of Wolfie the Bunny and cheerful illustrations from Rory the Dinosaur creator and Tumblr star Liz Climo, this rollicking story shares all of the ways a pet unicorn can ruin your life, and is sure to have readers in stitches. 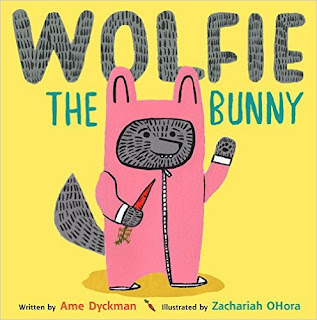 When the Bunny family finds a little bundle of joy—that happens to be a wolf—on their doorstep, they are smitten. Well, except for little Dot, who exclaims repeatedly, "He's going to eat us all up!!" Even her friends agree, but Dot's parents are captivated by the adorable baby—he's a good eater, sleeper, and drooler, they note. As Wolfie grows, Dot's worry is compounded with annoyance as he follows her everywhere in typical little brother-style. Having to go to the store for more carrots with Wolfie (who ate them all up!) makes Dot less than pleased, and she is on guard lest he tries to eat her. The fact that Wolfie is wearing an endearing bunny outfit does not make her feel better, but it does make the bear at the market think that Wolfie would make a yummy meal. Rather than run for safety, Dot terrifies the bear with tough talk of eating him up and saves Wolfie, who thanks her by pouncing on her with a big hug. The now-bonded siblings walk home hand in hand. The text is seamlessly integrated with the illustrations and uses various fonts to good effect. OHora's acrylic paintings are the heart of this tale. They clearly show everyone's feelings from fear to sadness to joy to anger to love and everything in between, and there are brilliant bits of humor and whimsy added to the mix. VERDICT A great book for one-on-one sharing that's also sure to be a storytime hit.— School Library Journal, Catherine Callegari, Gay-Kimball Library, Troy, NH