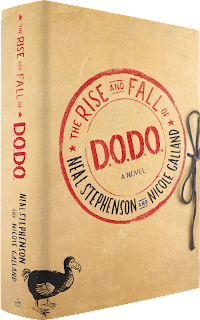 The Rise and Fall of D.O.D.O. by Neal Stephenson and Nicole Galland (William Morrow & Company, $35.00)
A brilliant new release! At 750 pages, D.O.D.O. is the longest book I've read in a long time. Initially daunted, I decided to poke my head in after reading the authors' collaboration statements:


"...If the writers aren't in sync, it unravels pretty fast, but if they share a clear vision of the characters and the story -- as Nicki and I did in this case -- then it can come together with surprising ease and swiftness. Once we knew who these people were and what they were going to do, Nicki made a first pass over the opening phase of the book while I ran tech support, tracking the timeline on a spreadsheet and spewing out gobs of techno-gibberish when that was needed. Then she tossed that over to me and I did my bit while she forged ahead. I won't say it was easy but I will say the collaboration went very well, with a lot of humor and a minimum of drama." -NS

"This collaboration was great fun, in part because I got to witness Neal spew out gobs of techno-gibberish, which he does very elegantly. Sometimes I felt like Scout to his Atticus (if Atticus were a mad scientist). ... When we had differences of opinion -- which didn't happen much, given the scope of the book -- they were resolved, as Neal has said, with good humor and a minimum of drama. (Confession: I'm more dramatic than Neal.)" -NG

Funny! So I read the first page, and then I jumped in and kept going. And it was totally worth it. I've since read it again. Read it, read it! It came out earlier this month, and it's a great take on historians, academics, time travel, magic, and shadowy government organizations.

Sorcery and Cecelia, Or the Enchanted Chocolate Pot by Patricia C. Wrede and Caroline Stevermer (Harcourt Brace and Company, $7.99)
Sorcery and Cecelia is an epistolary comedy of manners set in Regency England -- well, alternate Regency England, with magic added. It came into being by way of the "letter game," in which two authors become their characters and write letters back and forth to each other in real time, creating and refining the story along the way.

The Fall of the Kings by Ellen Kushner and Delia Sherman (Bantam, $7.99)
Hm. Oddly similar to D.O.D.O. in that it deals with the differing priorities of governance and scholarship, and it explores new ways of bringing history to life. Otherwise, it's rather different.
A sequel of sorts to Ellen Kushner's Swordspoint (and, later, The Privilege of the Sword), this book began with the authors dividing up spheres of influence to focus their writing (the City vs the University), and then they began reworking each other's writing, and reworking the reworkings. 'It is a pretty long book, and I wish I could tell you who wrote what,' says Ellen Kushner. 'But true collaboration is a funny thing: as Neil Gaiman recently told an interviewer (re. his work with Terry Pratchett on Good Omens), “I wrote 90% of the book. The only problem was, [s]he wrote the other 90%.”'

"Kushner and Sherman don’t spin fables or knit fancies: they are world-forgers, working in a language of iron and air." —Gregory Maguire

Welcome to Bordertown: New Stories and Poems of the Borderlands edited by Holly Black and Ellen Kushner
And, finally, here's a massive collaboration: five anthologies and three novels, set in a shared universe, with many recurring characters and many authors, some of whom started out as fans! Begun over thirty years ago, the Borderlands books were created and curated by Terri Windling and populated by an evolving community of authors, including at least three of the aforementioned collaborators. (Four, if you include Neil Gaiman.) They're not available at the Big Blue Marble, but they're worth trying to get your hands on. Here's what I said of Welcome to Bordertown after it came out in 2011:

In the ‘80s and ‘90s came a flood of books from the Borderlands, the newly created edge -- and its floodplain -- between our world and that of Faerie; a place where both magic and technology work ... sometimes. Basically, if you're gonna ride a motorcycle, you want to have some good spells on hand for when the engine cuts out on you. And vice versa. Bordertown is where runaways from both sides of the border go to start a new life. Now the birthplace of urban fantasy is back, and newbies are always welcomed...