Harry Potter and Philosopher's/Sorcerer's Stone was first published on June 26, 1997 - 20 years ago! Can you believe it? 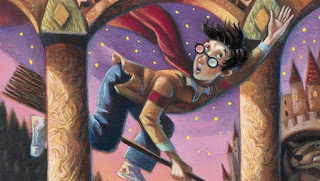 Big Blue Marble asked our staff and customers to share their first memories of reading Harry Potter and being seduced by J.K. Rowling's wizarding world.

Kelly Kuwabara, Philadelphia:  I remember once talking to a stranger on the (NYC) subway, a young man who told me he had never had an interest in reading, but got completely absorbed in the Harry Potter series. He loved those books. He said that after that, he was a lot more interested in books and reading, and expanded to other types of novels and non-fiction. When we struck up our conversation, he was reading Notes of a Native Son.


Maisie Quinn, age 10, Philadelphia: "My first memory of Harry Potter was when I was really little, like 3 or 4 or something, and I found my mom's old Prisoner of Azkaban book. I opened it up to the place where Hagrid just got the letter about Buckbeak saying Buckbeak would have to be in a hearing, and is hugging Harry and Ron and Hermione. Then I shut it again. I first started reading the books straight through in Kindergarten."


Katherine Knorr, South Philly: Visiting the official Harry Potter bus with Elliott batTzedek! Also,  I remember having to take the 3am train back to Philly from New York and being salty about missing the earlier one. But then I noticed the Hudson Books was still open and they were setting out copies of the latest HP because it was now officially release day. I bought my copy and sat around Penn Station reading until my train arrived.


Douglas Gordon, Philadelphia: My primary memory of HP is also a regret: that I've always intended to write a parody called "Larry Porter and the Crumpets of Doom" but have never gotten around to it.

Claire McGuire, Germantown/Philadelphia: I didn't learn about it til maybe early 1999. I was working as a nanny in Seattle. My charge was a baby, but her older brother was 5, and his mother was reading the first HP aloud to him. I remember that the mom was excited because her son said, "I'd rather listen to Harry Potter than watch TV!" When they were done with the book, I borrowed it.


Nini Engel, Philadelphia: We were living in England for two years, when HP5 Order of the Phoenix came out. We had pre-ordered a copy, but there were five of us, my husband and I, and our three daughters (14, 11 and 7. We spent the entire day, into the night, taking turns reading it aloud to each other. We got several hundred pages in before the youngest went to sleep and the eldest ran off with the book. It was a magical experience, and really, one of my happiest memories of their childhood.


Lorrie Kim, author of Snape: A Definitive Reading: I was part of a Usenet discussion group fighting an appalling troll. We were so tired of seeing her name that some people suggested we call her "She Who Must Not Be Named." Others had to explain to me that this was a reference to a popular children's series with an unspeakably loathsome villain. I just now realized that this is my very own "Troll in the dungeon!" story.

:-)  Little did I know I would end up writing a book about this children's series.


Sheila Allen Avelin, Owner, Big Blue Marble Bookstore: I bought my first HP books in California because I happened to be there on the launch day of HP4 with Elizheva Hurvich and we noticed this crazy long line of kids and were super-curious about what they were waiting to buy. I feel somewhat abashed that it took me so long to catch on, but I caught up quickly.


Elliott batTzedek, Event Coordinator, Big Blue Marble: I first found Harry Potter when I started working at Children's Literacy Initiative. While we only did books for pre-k to 1st grade, HP was on the staff shelf and all the trainers, who had been elementary teachers, talked about it endlessly. I finally read HP1 and HP2, and, honestly, I wasn't completely enchanted. Fun, yes, but they also felt redundant. Something happens in summer, train to school, feast, things happen, Quidditch, Halloween,  Christmas, things happen, more Quidditch, end of school year and dramatic things happen, tests, train home. But then HP3 came out and while the plot time line was the same for the first 3/4 of the book, the last 1/4 was amazing. Suddenly I cared passionately about Harry's parents and their few living friends, about the  people who had fought evil and paid a huge price, and how that after effects of that fight was totally shaping these kids' world in ways they were only beginning to comprehend.  After that it HP all the way, including the wonderful ritual of re-reading each book before the next one came out, and then going to the Midnight release.  I only discovered the Jim Dale audio books when they came out in Digital format and now they are my constant go-to if I need background for doing cleaning or chores or awake at night and needing the familiar to help me get my brain to shut up and go back to sleep.


Mariangela Saavedra: I was working at a daycare center in North Carolina in 2000 and a boy there named Kyle was a 4th grader who I drove on my van from school to the center every day after school was out. Because he was so tall (and also well behaved) he was allowed to sit in the front seat. He had HP3, The Prisoner of Azkaban,  with him on day. It had just been released in the fall (of 1999) and I had never heard of  Harry Potter but he was glued to this book every day. So I asked what it was about. Kyle absolutely lit up when he realized I had no idea about the story and he would be able to tell me everything about it. Starting from the very beginning every day on our 15 min ride from school to the center he would tell me a little more, till one day we caught up to where he was in the book. Everyday after that as he read more he would keep me updated on the story till it was done. Not long after that the 1st movie came out and to my excitement it was exactly as Kyle had described the story to me. A book that could capture the attention of a 9 year old, whose details he could remember perfectly, even though he was now books ahead in the series? This was a book series I had to read for my self. I read the first three in time for HP4 The Goblet of Fire US release and I read every book from then on the weekend they came out. Engrossed by every single one of them. I have loved many a book series in my life. But none as much as I have loved every single book in the Harry Potter Series. I can read them over and over and never tire of them. When we take family vacations we listen to the audiobooks narrated by Jim Dale. I look forward to turning my niece and nephew on to them when they are old enough to read them. It will be a magical time indeed!


Mary Gaia Prevost: I had initially avoided reading the Harry Potter books due to the “frantic fan frenzy”, but then a friend of mine who needed a distraction as her husband (who worked for the CIA) was going on a dangerous mission overseas. So we went to see the first H.P. movie…and I was HOOKED !!! I immediately went out and bought all the H.P. books that were out (the first 4 books) and was even more amazed. This was also the first time I had ever watched a movie before reading the book AND the first time (after reading the book) that the movie had captured the book almost perfectly. (P.S. the husband returned from the mission safely)


Faith Paulsen, Norristown:  I remember I read a review somewhere and introduced sons #1 and #2 to the first book which is all there was in the US at that time.So they were in maybe 4th and 6th grades. My oldest was a big devoted reader from early childhood and a big magic fan. My 2nd was more of an outdoors kinda kid, totally opposite of his brother. Yet they both loved the book! And we were hooked!


Dawn Vuckson, Minneapolis, MN: When I saw the first movie, Harry Potter and the Sorcerer's Stone, I was completely mesmerized by the Wand Shop. The shop and owner were exactly what my mind pictured when I read the book. I've never had a movie match my imagination before.


Jane Wiedmann, Philadelphia: HP5, "The Order of the Phoenix," came out on my wedding day so part of our honeymoon was spent reading it aloud to each other. We also gave it as our bridal party gift.

Ysabel Y. Gonzalez, Somerville, NJ:   Having a chance to see Harry Potter and The Sorcerer's Stone while the New Jersey Symphony Orchestra played live at NJPAC.

Christopher Schaeffer, Philadelphia:  I remember resenting the first book because all of a sudden nobody wanted to talk about Redwall at recess anymore.


Tiara Richardson, former Big Blue Marble staffer:  I was grounded for a week in third or 4th grade. I read every book except for the last one that week. I didn't read the final book until I was in my twenties ...at which time I bought the Kazu Kibuishi edition from Big Blue Marble. I was actually thinking of taking Sorcerer's Stone to Jury Duty with me tomorrow.


Tanya Kegler, NE Philadelphia: I wanted to read the books, but all copies of the Sorcerer's Stone were checked out at my local library.  After several visits, I decided to get the audio version for my morning/evening commute (at the time I worked in NJ) but I was so mesmerized by the story and the narrator that I started listening during lunch and at bedtime.   I finished the entire collection in a matter of five days.  HP books are still my all-time favorite and in honor of the 20th Anniversary I plan on reading them with my daughter (who is also 20).  #potterhead