Okay, so I was all set to work on a grim list of dystopic books starting with The Handmaid's Tale and Native Tongue, and then thankfully I noticed a brand new picture book by Andrea Davis Pinkney about Ezra Jack Keats, author of The Snowy Day*. I picked it up and was won over by her tribute to both a poor Jewish child of immigrant parents and the African American child he chose to bring to life in stories designed to diversify the world of picture books. And then I thought simultaneously of the nearly-as-new bio of E.B. White and the rather older story of Margret and H.A. Rey escaping the Nazis. And a more compassionate list was born. 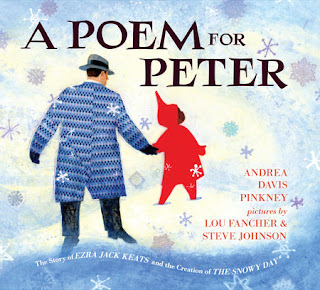 A Poem for Peter: The Story of Ezra Jack Keats and the Creation of The Snowy Day by Andrea Davis Pinkney, illustrated by Lou Fancher and Steve Johnson (Viking, $18.99)
The publishers of The Snowy Day were on the side of diversity, too, even back in 1962. Keats was expecting to use a snow sculpture on the cover, and his editor insisted he use an image of Peter instead.

Some Writer! The Story of E.B. White by Melissa Sweet (Houghton Mifflin Harcourt Books, $18.99)
Another heartfelt tribute. An illustrated biography full of collages of images and letters and early drafts of White's books. Note: Charlotte's Web didn't originally have that arresting first line the world has come to know and love...

The Journey That Saved Curious George: The True Wartime Escape of Margret and H.A. Rey by Louise Borden, illustrated by Allan Drummond (Houghton Mifflin, $8.99)
The Reys were German Jewish expatriates living in Paris when the Nazis swept through France. They escaped by bicycle shortly before the occupation of the city, and among their few possessions was the manuscript of Curious George. This book, beautifully illustrated, follows the story of their lives, both before and after their daring escape.

Wanda Gág: The Girl Who Lived to Draw by Deborah Kogan Ray (Viking, $16.99)
This is the story of the creator of the classic book Millions of Cats, and her struggles to keep art in her life while helping her family. Her name, by the way, rhymes with bog, not bag. (Assuming you pronounce "bog" with an "ah".) She added the accent herself. And Deborah Kogan Ray is a local author who's read at our Kids' Literary Festival!

Finding Winnie: The True Story of the World's Most Famous Bear by Lindsay Mattick, illustrated by Sophie Blackall (Little, Brown, $18.00)
Before Winnie was immortalized as Winnie-the-Pooh, she was a small brown bear, rescued in wartime and taken to the London Zoo, where she met a kid named Christopher Robin. Actually met. Meaning he was allowed into the enclosure, and they got to hang out together.

*which last year passed Harry Potter and the Deathly Hallows as the store's number one bestseller.
Posted by Jen at 10:26 PM