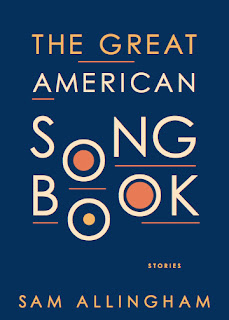 The Great American Songbook: Stories by Sam Allingham (Philadelphia)
I started reading these stories while waiting for Sam's event to begin, and could barely stop in order to sell the book to everyone else. Remarkable, haunting, funny, smart.

This Is Not a Confession: Essays by David Olimpio (New Jersey)
Essays that take on the lingering effects of sexual abuse, divorce, and grief and still manage humor and playfulness. This book moved me deeply, and I fell in love with David's online pictures of his dogs, too.

god's breath hovering across the waters by Henry Israeli (Ardmore).
This new collection of poems by Saturnalia Books editor Henry Israeli was written and published before this election, but are eerily timely. Written in the wake of the death of his mother, who barely escaped from Nazi Germany as a young child, The ugly power of nationalism and fascism haunt these poems: "Germany created a Hitler, / and, in turn, Hitler created / a Germany he could embrace / without flinching."

Flat Head Zed by Ellen Marcus (Philadelphia).
This imaginative picture book tells the story of a girl who does NOT want to make the same kind of snowman as other children. Instead, she creates a fun-loving block monster she names Flat Head Zed. What will happen when the other kids see her unique creation??