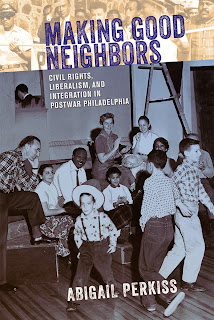 Please join Big Blue Marble Books this Friday, April 4, at 7:00pm, as we welcome Mt. Airy resident Abigail Perkiss in celebration of her new book on the history of integration in postwar Philadelphia. Making Good Neighbors: Civil Rights, Liberalism, and Integration in Postwar Philadelphia examines the history of race, ethnicity, and urban identity in post-WWII American cities, and focuses on the neighborhood of Mt. Airy.

What’s your relationship to Mt. Airy?

My relationship with Mount Airy is two-fold:

First, I lived in the neighborhood until I was nine years old and grew up steeped in the story and legacy of Mount Airy's integration efforts. I moved back in 2005 and have lived here ever since. My husband and I have enjoyed finding and creating a community here as adults, and we're about to add to the newest generation of Mount Airy-ites.

Second, I am an historian and my doctoral dissertation examined West Mount Airy's integration project, from the early 1950s through the turn of the 21st century. This book is based on that research.

At what moment did you decide you wanted to write a book about integration in Philadelphia?

Again, this book stemmed from my doctoral research. I hold a joint JD/PhD from Temple University, and while I was in graduate school, I found that my research interests in both history and law were coming together around issues of civil rights and racial justice, property rights, and community-building. When I began thinking about my dissertation, I knew that I wanted to explore these themes within the broader context of questions of identity formation, community cohesion, and historical memory. West Mount Airy's integration efforts kept emerging as a plot point, pulling together these various threads.

So, my interests in studying the neighborhood stemmed from a desire to understand and engage with both the actual history of post-war American cities and neighborhoods, and the story of Mount Airy's integration project and how that narrative has been constructed and shaped.

What are some things you learned in your research that surprised you?

One of the most compelling stories to me was the marketing of integration. In the early 1960s, once the process of creating integration in the community had been relatively well established, community leaders set out to market the idea of integration to a broader audience, both to attract new like-minded residents to the area and to situate their efforts within broader national and global conversations about racial justice, neighborhood sustainability, and democracy.

In 1962, for instance, West Mount Airy Neighbors hosted 200 individuals from 31 United Nations-member countries, to introduce them to and, in a sense, "sell" residential integration as part of the country's broader Cold War efforts to spread the democratic ideal around the world. Through this UN Delegates Weekend, they turned interracial living into a performance, a brand - an outward manifestation of liberal politics and achieved racial justice.

This vision of the neighborhood was critical to establishing the predominant narrative of Mount Airy's integration project and was disseminated in publications ranging from the New York Times, to McCall's, to Women's Day, to the Christian Science Monitor. It had pretty significant implications for how people within the community conceived of integration as well.

This branding of integration is directly related to another piece of the Mount Airy story: the differences - and at times disconnects - over the meaning of integration among black and white residents of the community. I was struck throughout my research by the ways that racial identity impacted how homeowners thought about interracial living.

For many of the white residents in Mount Airy, living in an integrated community served to legitimate their identities as liberal, urban Americans - again that idea of integration as a performance. At the same time, though, this white conception of integration was grounded in a sense of de facto economic exclusivity attached to middle-class notions of postwar liberalism. The WMAN integration project, then, at once allowed white residents to protect their homes and their quality of life in the neighborhood, and to live out their vision of manifested racial justice.

Meanwhile, for many black homeowners in Mount Airy, the prospect of integration brought with it a set of very material conditions - more secure investments, better schools, safer streets, more reliable municipal services - and a window into a professional culture with which they were trying to engage. Certainly, African Americans in West Mount Airy believed in and fought for racial justice and equality, but their interest in living among whites often stemmed as much from these tangible opportunities as it did from an abstract sense of justice.

These two ideas of integration very much complemented each other - as the class-based exclusivity critical for white residents allowed for the stability that many black homebuyers sought - but they also revealed that the experience of interracial living was bound by racial identity, and by the mid-1970s, these disconnects in the meaning of integration would create some pretty profound tensions in the neighborhood.

What did you learn that made you appreciate our Mt. Airy neighborhood more deeply?

One of my main goals as an historian is to teach my students that our world today was not an inevitability - that it has been shaped by the deliberate decisions and actions of individuals and groups of people and the intended and unintended consequences that emerged as a result.

And this applies to this research as well. Accounts of post-WWII neighborhood racial struggles aren't new. There is now a well-established narrative about the contentious relationship between race and urban space in the middle of the twentieth century, one in which the movement of African American homebuyers into previous all-white enclaves prompted aggressive clashes over ideas of private property and individual freedom, the threat of instability and crime, and the push for racial equality. In this story, segregation and racial inequity in American cities were not the inevitable outcome of postwar race relations, nor were they a reaction against 1960s radical racial power movements. Rather, the racial composition of neighborhoods was the result of intentional political, legal, and economic initiatives that fostered racial separation.

But - and this is an important "but" - just as segregation wasn't inevitable, neither was it the only possible outcome of these deliberate policies and practices. West Mount Airy's integration efforts offer insights into the decisions that individual homeowners had to make as they negotiated the racial landscape of postwar American cities. Here, a community in transition came together to find an alternative to racial separation, without knowing what they would create in its place.

That sense of the unknown - the commitment to embarking on something different without having a concrete sense of what the outcome would be - has given me a greater appreciation for what the neighborhood is today.

What can readers from Mt. Airy expect to find familiar in your book?

For many, the origins story of Mount Airy's integration efforts is a familiar one. But what was most striking to me in writing this book, and what I hope will be compelling to folks who read it, is not just that process of integrating, but the challenges, contours, and complexities that emerged out of that experience of interracial living. 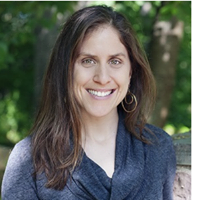 Abigail Perkiss is an assistant professor of history at Kean University in Union, New Jersey. Her research centers on the history of race, ethnicity, and urban identity in post-WWII American cities and has been guided by questions of identity creation, community cohesion, and historical memory. She holds a joint JD/PhD in history from Temple University, and her first book, Making Good Neighbors: Civil Rights, Liberalism, and Integration in Postwar Philadelphia, examines the creation of intentionally integrated neighborhoods in the latter half of the twentieth century. She lives in West Mount Airy.
Posted by Big Blue Marble Web at 11:35 AM

How many other communities in American urban areas are like Mount Airy?