Hi, Delia! Congratulations on the recent paperback release of The Freedom Maze! Here is my synopsis of the book:

Slated to spend the summer on her family's sugar plantation in Louisiana, 13-year-old Sophie wishes for a storybook adventure and is sent back in time by 100 years. In Sophie's own 1960, there is no question of who is black and who is white. It has never occurred to her that in 1860, tanned and barefoot, she might be taken for a slave in her own ancestral home...

I was excited to learn last fall that the paperback was finally coming out this year. I’m curious about what it’s like when you have a book published in hardcover by one publisher and in paper by another.

Believe it or not, when I first got into publishing, it was pretty much standard operating procedure for a paperback house (like Ace, Berkley, or Pocket Books) to buy reprint rights to previously published hardcovers. Now that the publishing business has changed, this is far more unusual, but it still does happen. In this case, it was because a small press like Big Mouth House doesn’t have the time, money, or personnel to send out all the free copies and file all the paperwork necessary to get a book into schools and libraries, which is where we all agreed that The Freedom Maze belonged. Things have worked out perfectly—for me, anyway. Kelly Link, who has been cheering me through TFM since I first started working on it 20 years ago, was the perfect editor for it, and Candlewick, with their impressive roots in the children’s book world, is the perfect distributor.

While I think of you mostly as a New Yorker, I know that you spent time in Louisiana while growing up. How did your own experiences influence Sophie’s character and the development of her story?

Since my father was from South Carolina and my mother had family in both Texas and Louisiana, there are ways in which I grew up in the South even though I actually lived in New York. Take my family’s views on race. Although Papa held extremely progressive views for his age and background, Mama was a little more, shall we say, conservative, as were most of her relatives. One of my aunts, for instance, came back from Africa full of indignation about about how bad Africans smelled (which made me wonder why she would go in the first place, but people are strange, right?). Add to this the fact that none of the African-Americans I met, either in the North or the South, conformed in the smallest detail to the stereotypes my southern relatives described, and you got a kid who did a lot of thinking about prejudice, blind assumptions, and privilege. My life-long wrestling with these issues is reflected in Sophie’s story, as are my thoughts on Being A Lady, how to define Family, and the importance of Blood and Heredity—all of which are more important (or at least more discussed) in the South of my youth than in the New York of today.

I really like reading about Sophie’s friend Canny and her family. It's always good to have people on your side when you're in a new and overwhelming reality! How did they come to be? Did you create the family all together, or did the characters come along separately?

I tend to make up characters as I need them. And since I adore making up characters, the problem, really, is keeping them down to a manageable number. My favorites arrive fully fledged and determine the course of the narrative. For instance, I knew Oak River needed a cook because every plantation needs a cook. I began to write and Africa appeared on the page and kind of took over. And of course she had to have a family, and of course they turned out to be interesting, active folks. It took me a while to get to know Ned and Poland and Flanders, but Canny, like her mother, was always very much herself.

The Freedom Maze tackles complicated issues of race relations and racial identity. And while Sophie herself is certainly coming to her travels from a world of white privilege, she is surrounded by people who aren't. How did you approach the task of writing the stories of your African American characters living in slavery? What kinds of reactions have you had from readers?

Research, research, and more research. I read social histories, memoirs, slave narratives, plantation documents. I went to plantation and folk-life museums in Louisiana (I recommend one in Baton Rouge particularly) and asked a lot of questions of the docents. I had conversations about civil rights, white privilege, writing the other, the religion of Voodoo, weaving, sewing, and cooking in the 19th century, sugar culture and manufacture with friends, experts, and historians of all colors, ages, and backgrounds. I gave my manuscript to kind and rigorous readers, and listened to what they had to say, and I talked with them about how I could fix (or at least address) its problematical parts without compromising the story I wanted to tell. On the whole, readers' reactions have been wonderfully positive. I have done a couple of talks after which a reader has asked me how a fair-skinned child (even one with a tan) could possibly be taken for a slave, and on both occasions, the questioner has been white. There has also been a little discussion about whether Sophie is a White Savior.

Having heard you read aloud -- both from Freedom Maze and from your other works -- a number of times, I know you have a particular ear for language and dialect. What was it like coming up with the different voices for your characters?

Fun. One of the things I’ve always noticed about people is how they speak. Even in the most casual conversation, the language a person uses reveals something about their education, interests, experience, social context, age, even character. For me, language is a method of characterization. If I know what a character looks like and how she talks, I’ve pretty much got her. That said, sometimes I have to do a bit of writing and rewriting to pin down a character’s voice. You don’t want too many crabby old ladies (or at least not crabby in the same way), for instance, or characters who are nothing but mean or helpful or sassy or comforting. You want people who sound like they have a life when they’re not talking to your hero. Varying the way they speak helps with that.

One of the things I love about The Freedom Maze is that at the end (only mild spoiler, I think) there is clear evidence – both to readers and to Sophie's family -- that the adventure was real. No one tries to convince Sophie to dismiss her tale as a dream or the product of wild imaginings. Did you do this deliberately, or did it just flow from the progression of the story?

A little bit of both, actually. Sophie doesn’t really expect anyone to believe her, so she doesn’t tell anyone but Aunt Enid. She only tells her because she’s tired and sad and can’t think of a plausible lie. She also knows that Aunt Enid absolutely believes in ghosts and strange happenings and magic, even if she is freaked out when confronted with proof that they’re real. Sophie’s actually having aged 6 months was very deliberate indeed. I can remember being utterly disgusted when the Pevensies became children again when they tumbled back through the wardrobe from Narnia. They’d been adults, for Pete’s sake: Kings and Queens with responsibilities and knowledge and experiences under their belts that would have made becoming children again almost impossible to bear. I wasn’t going to do that to my magic adventurer, no siree—especially since I have seen for myself that adolescents do tend to change pretty dramatically once they get going and those closest to them are the least likely to notice (or accept) those changes.

The eponymous maze has an interesting journey itself throughout the book, as it moves from background to forefront and then fades again multiple times. And of course because it’s made of growing things, it looks and feels different in different eras. Have you spent time in places with this kind of living maze?

Nope. I just love the idea of mazes, and always have. I stink at actually figuring them out, except in those puzzles you find in kids’ activity books.

Do you have current or upcoming projects you’d like to tell us about?

I’m delighted to say that The Freedom Maze has just been published in France by Editions Hélium, in a beautiful translation I got to read and comment on. I’m closing in on the last draft of a new middle grade book, this one set in Maine, about a boy who runs away from home and is taken in by an Evil Wizard. It’s got Selkies and werecoyotes and motorcycles and magic in it, it is called The Evil Wizard Smallbone, and it is a lot of fun to write.

1. What were 3 of your favorite books from childhood/teen years?

The Merry Adventures of Robin Hood by Howard Pyle
The Secret Garden by Frances Hodgson Burnett
The Lord of the Rings by J.R.R. Tolkien

2. What are 3 books that you've read recently that surprised you?

Adaptation by Malinda Lo
Coldest Girl in Coldtown by Holly Black
Three Bags Full by Leonie Swann (which is not a kid’s book, but is absolutely astonishing)

3. What are 3 books that influence/d your work?

Thank you so much for joining us! 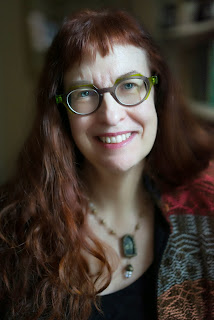 photo credit: Augusten Burroughs
Delia Sherman writes short stories and novels for adults and young readers. Several of her short stories have been nominated for the Nebula and World Fantasy Awards, and her most recent novel, The Freedom Maze, received the Andre Norton Award, the Mythopoeic Award, and the Prometheus Award. A collection of her short stories will be published by Small Beer Press in 2014. She has taught many writing workshops, including Clarion, the Hollins University Program in Children's Literature, and Odyssey. She has taught Freshman Comp, worked in a book store, and been a freelance editor. She can write almost anywhere, but prefers cafes and comfy sofas near a source of tea. She lives in New York City with her wife Ellen Kushner and many fine books, most of which at least one of them has read. Besides reading other people's manuscripts and writing her own, favorite occupations are travel, knitting, cooking, and having fun adventures, as long as they don't involve actual dragons.

Thanks for reading!!! If you're local to the area, please let the bookstore know if you would like to order a copy of The Freedom Maze. You can email orders to orders [at] bigbluemarblebooks [dot] com, call (215) 844-1870, or come see us at 551 Carpenter Lane, in the Mt. Airy neighborhood of Philadelphia.


Next up: on April 29th, come check out Cordelia's interview with Skila Brown, author of Caminar.