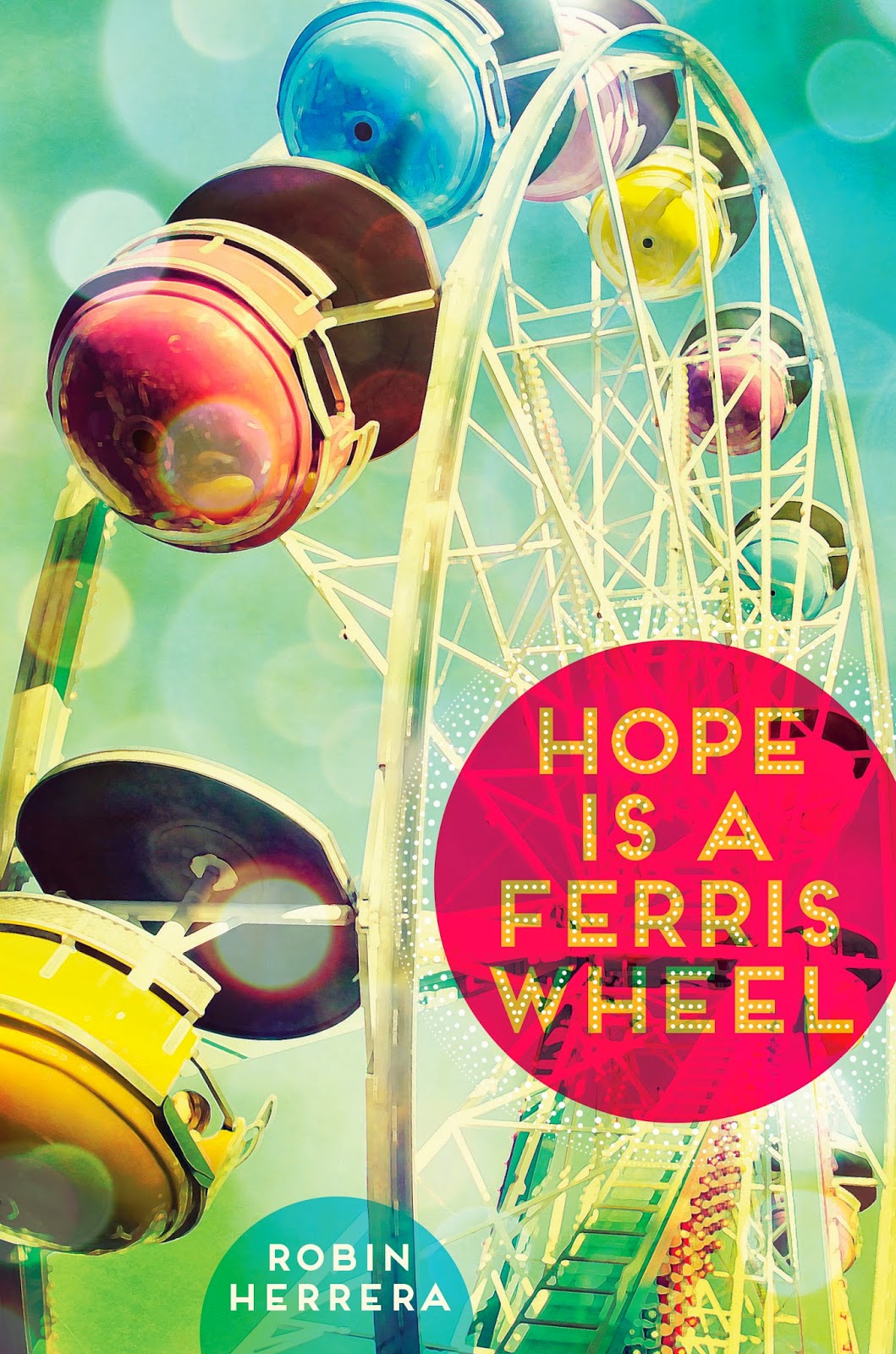 Congrats on your Middle Grade debut, Hope Is A Ferris Wheel. It is a terrific book.

Here is a synopsis:

Ten-year-old Star Mackie lives in a trailer park with her flaky mom and her melancholy older sister, Winter, whom Star idolizes. Moving to a new town has made it difficult for Star to make friends, when her classmates tease her because of where she lives and because of her layered blue hair. But when Star starts a poetry club, she develops a love of Emily Dickinson and, through Dickinson’s poetry, learns some important lessons about herself and comes to terms with her hopes for the future. With an unforgettable voice with a lot of heart, Hope Is a Ferris Wheel is the story of a young girl who learns to accept her family and herself while trying to make sense of the world around her.

Star is such a likeable character and, yet, has so many obstacles in her way. Overall, she has this shining, hopeful spirit that had me cheering for her from the start. I also really liked that you used first person perspective for this particular story. Was it always written in first person or did you play around with other perspectives?

I believe I wrote the first chapter in third-person when I started. It never quite took off for me – even in third-person, there should be a voice there. But there wasn’t. It was just blah and bland.

However, I then wrote Star’s first set of Vocabulary sentences using first-person (because she was the one writing them, natch) and her voice came through bright and clear. I decided to write the rest of the manuscript in first-person and haven’t changed it since.

I like how Eddie both challenges Star and sees her strength. He also points to her character flaw a few times. Another author might have chosen one of her family members to point out Star’s stubbornness but I like that you have a character a bit further outside herself that pushes her to grow. Was this your intention?

That was intentional, yes! I’m of the belief that the people closest to you (like your
family) sometimes have glaring blind spots about your flaws. So Eddie was the perfect
person to do that, especially because Star sees him as very flawed herself. It helps that Eddie’s incredibly blunt, even to Langston.

Plus, I think it shows that Eddie actually really likes Star. He’s the only person in the book, I believe, who sees this stubbornness in her. He’s very observant. I wanted that to come across.

The way poetry is weaved throughout the book shows the earnestness of the age group to learn and to absorb beautiful material. As a creative writing teacher of 8-12 year olds, the awe and intrigue the kids had in the poems felt very accurate. Were you an early poetry lover? Did you ever make up a club yourself?

The poetry I loved as a kid was the silly poetry. Shel Silverstein and Judith Viorst were
my favorites. I also listened to a lot of Simon & Garfunkel as a kid, who I think are very
poetic.

The only club I belonged in during Elementary School was, oddly enough, the Stamp
Club. It sounds boring, but I had a lot of fun. We went to a stamp convention once and I
bought some Disney stamps from another country. My favorite stamp was a 3-D stamp
from I think Abu Dhabi? Actually, I just googled it, and they were from Bhutan. But they
were 3-D!

That does NOT sound boring. The relationship between Winter and Star is probably my favorite part of the book. I noticed that the book is dedicated to your sister. Did you do any free-writing from Winter’s perspective? As I was reading, I felt like I could have read a YA book from her point of view simultaneously. She felt as three-dimensional to me as Star.

I never did any free-writing for Winter, though I got a lot of comments on early drafts of
the book that it seemed to center around her too much, so I had to dial that down for the
final drafts. But I felt like I knew Winter very well, though she’s not all that similar to my sister.
The thread I hung onto while writing scenes between Star and Winter was the memory
of looking up to my older sister when I was Star’s age. My sister was the coolest person
I knew. She had the most awesome clothes. Her hair was amazing. She was funny and
witty and smart. So I kept that filter on Star when I wrote, and I’m really glad that so
many people have commented on their relationship. I love those two!

Me too! Anything else you would like us to know about you or your book?

It’s funny! I think that’s something that hasn’t been advertised quite as much, but it’s not
all drama and family secrets and trailer parks. There’s some very funny stuff in there.

And now our “3 for 3” book-related questions:

1. What were three of your favorite books as a child/teen?
I Am Regina by Sally M Keehn, Jacob Have I Loved by Katherine Paterson, and The Ear, the Eye, and the Arm by Nancy Farmer.

2. What three books have you read recently that surprised you?
Roll of Thunder, Hear My Cry by Mildred D. Taylor (because I didn’t like it as a child), Yaqui Delgado Wants to Kick Your Ass by Meg Medina (because even though no one dies, it made me weep ugly tears), and Archer Coe and the Thousand Natural Shocks, by Jamie S. Rich and Dan Christensen. Okay, so I read that last one for work, but it still surprised me! Both in plot and art. Dan’s art is fantastic, and I think it’s Jamie’s best work yet.

3. What are three books that influence(d) your writing?
A Crooked Kind of Perfect by Linda Urban, The Wayside School Series by Louis Sachar, and probably (oddly enough) Battle Royale by Koushun Takami.

Robin Herrera is an aspiring cat lady living in Portland, Oregon. She has a BA in English from Mills and an MFA in Writing for Children and Young Adults from Vermont College of Fine Arts. In the past, she has worked as a waitress, an after-school teacher, a cashier, and an omelet flipper, but she now works as an Associate Editor for Oni Press in addition to being a writer. Hope Is a Ferris Wheel is her first book.
Thanks for reading!!!

If you're local to the area, please let the bookstore know if you would like to order a copy of Hope Is a Ferris Wheel. You can email orders to orders [at] bigbluemarblebooks [dot] com, call (215) 844-1870, or come see us at 551 Carpenter Lane, in the Mt. Airy neighborhood of Philadelphia.


Next up: In mid-April, come check out Jen's interview with Delia Sherman, author of The Freedom Maze.

Great interview, Cordelia and Robin. So glad that Linda Urban is such an influence, Robin. Congrats on your debut.