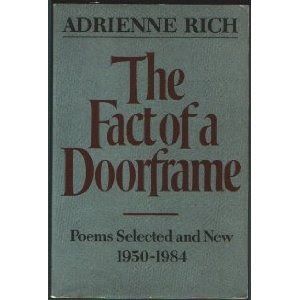 When Adrienne Rich died at the end of March this year, I delved into my college diaries to find out what I'd said about reading The Fact of a Doorframe in Intro to Literature, and what I'd said the first time I saw her read. What I found was a poem called "Bears," which I hadn't remembered copying in ... in fact, I hadn't remembered it at all until I reread it, and the words washed over me once more with power and longing and the memory of unknown losses.

At the store last week, I took The Fact of a Doorframe off the shelf to write this post, and I couldn't find the poem. I searched the pages, the table of contents, the index ... and finally I looked at the front cover and realised that this was not "Poems Selected and New, 1950-1984" but instead "Poems, 1950-2001". Reissued and revised to include the whole of her career to that point, and clearly not just expanded, but shuffled -- some poems in, some poems out.

So here is one of the poems now lost from the collection. Who keeps it now?

Wonderful bears that walked my room all night,
Where are you gone, your sleek and fairy fur,
Your eyes' veiled imperious light?

Brown bears as rich as mocha or as musk,
White opalescent bears whose fur stood out
Electric in the deepening dusk,

And great black bears who seemed more blue than black,
More violet than blue against the dark--
Where are you now? upon what track

Mutter your muffled paws, that used to tread
So softly, surely, up the creakless stair
While I lay listening in bed?

When did I lose you? whose have you become?
Why do I wait and wait and never hear
Your thick nocturnal pacing in my room?
My bears, who keeps you now, in pride and fear?

The Lesbian Bears
Martha Courtot (circa 1975)


at night while they slept in the open
they would dream of unnatural acts
in brown fur
a female bear would come
wrapping her lustful arms around the bodies
of all the women
then they too would be lost
is this where lesbians come from?


ah, everything is lesbian which loves itself
I am lesbian when I really look in the mirror
the world is lesbian in the morning and the evening
only in mid-afternoon does it try to pretend otherwise


admit it you too would like to love yourself
and each other
now, while the vigilantes
wander the mountains
now is the perfect time


embrace the one nearest to you woman or child
apricot, salmon, artichoke, cow