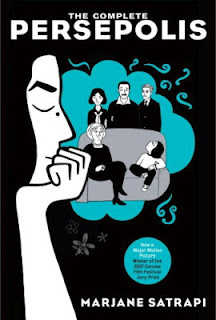 Persepolis by Marjane Satrapi, translated by Mattias Ripa and Blake Ferris (Random House, $13.95)
Can you imagine not just translating the meaning, culture, and emotions of the text, but also making sure the words will fit in the captions and speech bubbles? This team of translators brought us a work that changed how we think about Iran, and was the first graphic memoir many of us fell in love with.

The Grimm Reader: The Classic Tales of the Brothers Grimm, translated by Maria Tatar (Norton, $16.95)
Grimms' fairy tales are so deeply part of our culture that it’s easy to forget they are translated from German. Maria Tatar has made the stories fresh, and restored a cultural depth that has been lost in simplified, scrubbed, mass-media versions. Definitely a version for adults. (How did these become “children’s stories,” anyway? Read her intro to find out!)

The Prague Cemetery by Umberto Eco, translated by Richard Dixon (Houghton, $27.00)
Richard Dixon says that, including brief interruptions, translating Eco’s novel took eight months: “I worked fairly slowly on the first draft because there was a lot of research to do. That first draft is always the most important – it’s the stage when errors creep in. I then worked through another two drafts, trying each time to work on getting it to sound as natural and readable as possible, especially the dialogue. After the third draft I printed it all out, gave it a final read-through, made the last few changes and sent it to Eco and the publishers.”

The Girl with the Dragon Tattoo by Stieg Larsson, translated by Reg Keeland (Random House, $15.95)
Translator Steven Murray, who translates in UK English under the name Reg Keeland, has produced books which prove it DOES pay to translate crime. Only about 3% of all the books published in the U.S. each year are translations — but Murray’s English versions of Larsson’s Millennium Series may help change that.

Please Look After Mom by Kyung-Sook Shin, translated by Chi-Young Kim (Random House, $14.95)
Who would we be if we did not have access to other lives, other stories, other cultures? Without translators, there would be no Women of the World book club, no Homer, no Hans Christian Anderson, no Bible. Even though translators often work in anonymity, with their names appearing only in small print buried in a book’s front matter, they are no slouches. Chi-Young Kim has received the Man Asian Literary Prize (2011), the Korea Literature Translation Institute Translation Grant (2011), the Daesan Foundation Translation Grant (2008, 2005), and the 34th Modern Korean Literature Translation Award (2003).