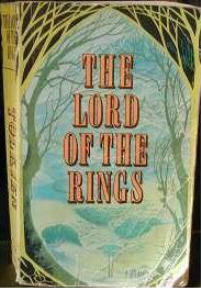 Elves and fairies are often portrayed these days as small, cute, and, above all, safe. In light of our fairytale/superhero-movie-ticket book promotion this summer*, here are some excellent fairy tales in which -- while they may be funny (or worse, scathingly ironic!) -- the Folk are formidable friends...or formidable enemies...or both.

The Lord of the Rings by J.R.R. Tolkien (Random House, 3 vols, $7.99 each)
The elves of Middle Earth are, for me, the archetype of elves as keepers of wisdom and dignity. In 1953, Tolkien was appalled when an editor went through his manuscript and changed the word “elven” to “elfin” throughout. Wouldn’t that feel like a different story...?

[Note about the cover image: the LotR books we carry in the store are the standard three volume set, with their own titles on the cover -- so I've amused myself by finding a picture of the single-volume paperback (1076 pages!) that was the version I read as a kid.]

Welcome to Bordertown, edited by Holly Black and Ellen Kushner (Random House, $10.99)
In the ‘80s and ‘90s came a flood of books from the Borderlands, the newly created edge -- and its floodplain -- between our world and that of Faerie; a place where both magic and technology work ... sometimes. Basically, if you're gonna ride a motorcycle, you want to have some good spells on hand for when the engine cuts out on you. And vice versa. Bordertown is where runaways from both sides of the border go to start a new life. Now the birthplace of urban fantasy is back, and newbies are always welcomed...

Changeling by Delia Sherman (Penguin, $8.99)
If you hang with the Fair Folk, you have to pay attention to the rules -- even the ones you don’t know. New York Between is the immigrant folklore overlay to Manhattan, and Neef is the mortal changeling of Central Park. Not only does she get herself an unwanted quest by breaking the rules, she also gets to spend it with her fairy twin -- the unsuspecting changeling kid who's growing up in her place.

Lords and Ladies by Terry Pratchett (HarperCollins, $7.99)
In the little kingdom of Lancre, everyone knows that there are no elves anymore, and that if they ever came back, they would be wonderful, beautiful, and, well, glamorous. Any stories to the contrary are just old wives’ tales. The witches of Lancre, on the other hand, aren’t Everyone, and they know what would really happen...

Tam Lin by Pamela Dean (Penguin, $8.99)
So if you take the Ballad of Tam Lin, turn Carterhaugh into Carter Hall on a college campus, send a professor’s daughter there to study, throw in a bunch of literary allusions... It’s quite a story. Just keep an eye on the Classics department.

*Keep an eye out for similarly relevant lists throughout the summer...