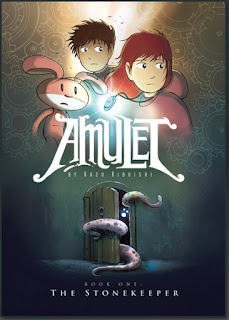 There’s an idea in the publishing industry that girls will read books about boys, but boys won’t read books about girls. These are some books (and series) that disprove that notion! All of these are the first book in a series, so once your kid gets hooked, there are plenty more to keep them going.

The Amulet graphic novel series (Book 1 is Stonekeeper) by Kazuo Kibuishi (Scholastic, $10.99)
Emily finds she has inherited an amulet that will allow her to save her mother, but it also commits her to saving an entire alternate world. First, she must master the power of her stone. Beautifully drawn and full of gorgeous steampunk detail, this will please adventurers, artists, and reluctant readers. First grade and up.

The Emerald Atlas by John Stephens (Random House, $17.99; paperback coming in April for $7.99)
Kate, Michael, and Emma aren’t really orphans, even though only Kate remembers their parents. After they arrive at an orphanage where they are the only wards, they travel through time, escape a villainous countess, and quest through underground realms to find the secret of a powerful book whose destiny is entwined with theirs. Fourth grade and up.

Hereville: How Mirka Got Her Sword by Barry Deutsch (Amulet, $15.95)
Another graphic novel offering, Mirka is an 11-year-old Orthodox Jewish girl who would rather fight dragons than learn to knit--though it may just be that those two activities have more in common than you might think. I love it that Mirka’s stepmother is pretty much the opposite of evil (though she can be a little brusque). For Third grade and up.

The Case of the Missing Marquess by Nancy Springer (Penguin, $6.99)
When her mother disappears, Enola Holmes, Sherlock and Mycroft’s younger sister, runs away rather than allow herself to be sent to boarding school, and embarks on her own investigations. Every bit as much a master of disguise as her famous brother, these are full of adventure. Fifth grade and up.

Jackaroo by Cynthia Voigt (Simon and Schuster, $6.99)
Gwyn is the innkeeper’s daughter and has heard stories of Jackaroo her entire life, how he rides out of the hills to champion the common folk against the greed and exploitation of careless lords. They’re only tales, though...or aren’t they? Seventh grade and up.