The Wizard of Oz by L. Frank Baum (Puffin, $4.99)
“I can't come back! I don't know how it works!” This cry from the Wizard of Oz film is good for a laugh, but in the book the Wizard calls only, “I can't come back, my dear...Good-by!” That's because the Wizard does know how it works, having worked closely with Dorothy to cut and sew together long strips of green silk in different shades, coat the inside of the bag with glue, and then fill it with hot air (which he concedes is not quite as good as gas, but will probably do). I love that I learned stuff like this from the books I read as a kid... 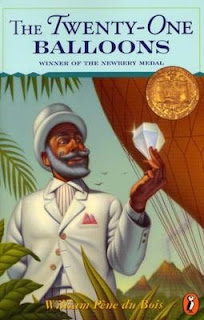 The Twenty-One Balloons by William Pène Du Bois (Puffin, $6.99)
I learned even more about hot air ballooning from The Twenty-One Balloons, which my fourth grade teacher read to us in class. Diagrams and descriptions of actual balloon-related inventions punctuate this fanciful story of a lone balloonist, the island of Krakatoa, and the absurd intentional community he finds there in 1883. From this book I also learned what really happened to Krakatoa in 1883.

Leviathan by Scott Westerfeld (Simon & Schuster, $9.99)
Steampunk is generally held to contain both gadgetry and dirigibles. There are plenty of gadgets here, as the Central (“Clanker”) Powers in this alternate 1914 have armed themselves with mechanical walking vehicles. The Allied (“Darwinist”) Powers, on the other hand, have developed living dirigibles, spun together from the “life threads” of different species. I know I've already recommended this young adult series twice before (and Nif once); it's really that good. And I've learned a lot about the history of WWI. (The real history, that is.)

The Eyre Affair: A Thursday Next Novel by Jasper Fforde (Penguin, $15.00)
Dirigibles don't have a leading role here, and so it took me a while to find the part of the book where Thursday travels by airship. But I always describe this world as “an alternate 1985, in which the Hindenburg disaster never happened”. There's genetic engineering in this world too, with dodos, mammoths, and neanderthals brought back from extinction. Literature is both more prominent and more of a commodity, with manuscripts (and forgeries) exchanged on the black market, chased by our intrepid hero, Literary Detective and Crimean War vet Thursday Next. (Yes, the Crimean War. In 1985.)

[Note: The Thursday Next series has been previously quoted on the blog, and Jasper Fforde is also one of my August Picks.]

Changeless by Gail Carriger (Orbit, $7.99)
This is book 2 of the Parasol Protectorate series (book 5 is due out in February!), in which Alexia Tarabotti, preternatural (soulless) and working for Queen Victoria, travels the length of England by dirigible, in the company of her sister Felicity and friend Ivy (both human), to investigate the mysterious humanizing affliction of the local supernaturals (carriers of excess soul). If she’s off her dinner and nearly tossed off the airship, will that change how she feels about air travel?

[Note: Changeless has been previously quoted on the blog, and Book 1, Soulless, is one of Erica's October 2010 Picks.]

Some aeronautical runners-up: Charlotte's Web by E.B. White, and James and the Giant Peach by Roald Dahl.