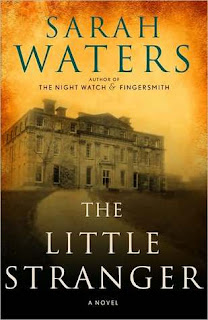 What is it with houses? You kill someone in one of them and they’re just like elephants—they never forget. They go on about their business providing shelter and whatnot, but they’re irrevocably imbued with some kind of evil. What’s the deal, houses? Can’t we all just get along? Here are five novels starring real estate you definitely don’t want to own.

The Little Stranger by Sarah Waters (Riverhead, $16.00)
Demented domicile: Hundreds Hall.
“I first saw Hundreds Hall when I was ten years old. I remember its lovely ageing details: the worn red brick, the cockled window glass, the weathered sandstone edgings. They made it look blurred and slightly uncertain—like an ice, I thought, just beginning to melt in the sun.” Downton Abbey, it ain’t.

The Shadow of the Wind by Carlos Ruiz Zafon (Penguin, $16.00)
Demented domicile: The Angel of Mist.
“As I neared the mansion I noticed that one of the statues, the figure of an avenging angel, had been dumped into the fountain that was the centerpiece of the garden…The hand of the fiery angel emerged from the water; an accusing finger, as sharp as a bayonet, pointed to the front door of the house.” Nota bene: when avenging angels point in one direction, it's best to walk in the opposite.

The Wind-Up Bird Chronicle by Haruki Murakami (Vintage, $16.00)
Demented domicile: The Hanging House.
“I had never seen a vacant house before, so I didn’t know what an ordinary vacant house looked like, but I guess I figured it would have a sad, beaten sort of look, like an abandoned dog, or a cicada’s cast-off shell. The Miyawakis’ house, though, was nothing like that. It didn’t look 'beaten' at all. The minute the Miyawakis left it got this knowing look on its face…You just can’t trust a house.” Tell me about it, they’re always telling your secrets and airing your dirty laundry in their backyards.

The Shining by Stephen King (Simon & Schuster, $8.99)
Demented domicile: The Overlook Hotel.
“The Overlook was built in the years 1907 to 1909. The closest town is Sidewinder, forty miles east of here over roads that are closed from sometime in late October or November until sometime in April. A man named Robert Townley Watson built it, the grandfather of our present maintenance man. Vanderbilts have stayed here, and Rockefellers, and Astors, and Du Ponts. Four Presidents have stayed in the Presidential Suite.” Guess what? I’m still not booking my next vacation there.