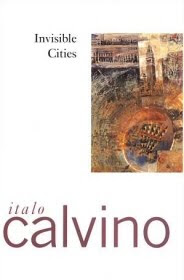 Invisible Cities is basically a series of prose poems, each describing a different city. There are only two characters in the book; the explorer Marco Polo who collects stories about cities and the emperor Kublai Kahn demands to hear about the cities contained in his falling empire. Perhaps the best synopsis of the book is the statement offered by Marco Polo that “an invisible landscape conditions the visible one.” As a surrealist, I found the book especially captivating because on one level it deals in the fantastical—cities which seem to exist in other dimensions, gargoyles which come to life, and cities that sprawl so rapidly that you cannot escape them. On another level Calvino touches on profound truths about geography and imperialism as well as the social, political and environmental forces that shape cities. I found this book to be tremendously fun, my roommates will attest that it caused me to jump up and down with excitement more than once. At 165 pages it is a quick read but it also challenged me look closer at the world around me. I’ve always imagined myself as an urban explorer but I found myself looking up and down and imagining the routes of storm sewers and buried streams with a new sense of urgency.

- reviewed by Mo Speller
Posted by Maleka at 6:17 PM