A Measure of Truth About Liar 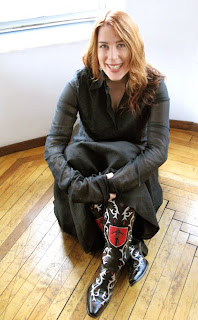 How exciting to have Justine Larbalestier round off her Liar tour with a visit to Philadelphia!

Justine admired the Big Blue Marble (in fact, her publicist declared intention to take up lodging on a comfy chair and not go back to New York), tried kiwi berries for the first time, and talked with us about the writing of her newest book, which was composed in small scenes and then shuffled around and retrofitted. She described the process as akin to working with a jigsaw puzzle -- if what one did when moving a jigsaw puzzle piece was to violently lop off the sticky-out bits and "grow new wings" to make it fit in the new place.

Throughout its writing, Liar grew in ways Justine hadn't foreseen. It turns out that her earliest ideas for the book involved its being a lighthearted comedy (which, to be fair, did make us laugh). She spoke about how hard she worked to make different interpretations equally probable, and she told us about being surprised by readers' interpretations that hadn't occurred to her at all. She spoke about race and gender issues, and she described her careful work to make sure her teen-aged New Yorker narrator didn't sound Australian -- and her chagrin that no one had noticed. (Which speaks to how well she succeeded, of course.)

There were a lot of interesting and insightful questions, and, curiously, no discussions of Justine's boots, just her books. Also, she writes on her blog of her Scott Westerfeld impressions, and they really are impressive: the one she did last night made it seem as though he was really there! Oh, wait -- he was really there.

I was particularly impressed with her answer to a question of Maleka's about writing characters who have significantly different backgrounds from the author. She said, as she has elsewhere, that you can't be afraid of people getting mad at you for misrepresentation, because anyone whose writing gets published will find readers getting mad at them for something. But she made it clear that she doesn't mean one should ignore the critics; she means that one should expect the critics, and then listen to the criticism and learn from it.

Justine Larbalestier blogs at justinelarbalestier.com/blog/.
Here is her website's Liar page.
Posted by Jen at 3:12 PM

Thanks so much for inviting me to appear at Blue Marble. Twas lovely and such great questions.

Thanks also for the kiwi berries and the apples and pears. The apple beginning with a J (the label rubbed off) was most excellent. Tart and sweet and crisp.

I remember that one -- Jonagold. I'm glad you liked them.

Thank you so much for coming. We had a great time!