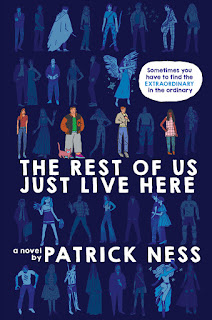 The Rest of Us Just Live Here by Patrick Ness (Harperteen, $17.99)
This isn't exactly a fantasy story. That is, there is an invasion of Immortals, and there are teens who take it upon themselves to find out everything, and right the wrongs, and possibly die in the process...but this is not their story. While their story is synopsized, briefly, as the first paragraph of every chapter, the rest of the book...covers other kids at the school. Regular kids. And their families and friendships. And the new kid in their crowd. And the secret or not-so-secret crushes, and the meaning of life and love. All regular, normal stuff. Even if one of them might possibly be a god of cats.

Another Day by David Levithan (Knopf, $17.99)
This is the companion to Every Day, Levithan's story of a teenager called "A" who occupies a different person's body each day, meeting their peers and parents, and conscientiously trying not to change their lives too much. But then A meets Rhiannon and tries, against all odds, to meet her and get to know her, day after day. Another Day tells the same story, brilliantly, from Rhiannon's point of view.

Symptoms of Being Human by Jeff Garvin (Harperteen, $17.99)
Supposing you were the child of a noted politician, starting a new school, suffering from anxiety attacks...and genderfluid. Especially when you're not out, and you need to avoid gender dysphoria differently on different days, and the kids at the new, promising school are not new and accepting but (mostly) new and awful. Riley has been advised to start an anonymous blog to help process all this...but then the blog goes viral, and it starts to become clear that someone at school, not one of the nice ones, may have found out who the author is.

On the Edge of Gone by Corinne Duyvis (Amulet Books, $17.95)
I've mostly avoided planet-wide natural disaster stories of late, but this one struck me because the main character who's trying to find shelter for herself and her family (so they can survive the comet and its aftermath), is living with autism. And with a parent who's not entirely present, so she starts taking on more responsibility. A fascinating look at different types of accommodation, and an extra twist to the disaster situation.

What We Left Behind by Robin Talley (Harlequin Teen, $18.99)
A fascinating story focusing on the intersections of sexuality and gender. And long-distance relationships, and new friends, and change. And gendered language. Oh, and truth: the figuring out and withholding and parceling out and offering of (not necessarily in that order).

Adapted from the February Big Blue YA Newsletter.