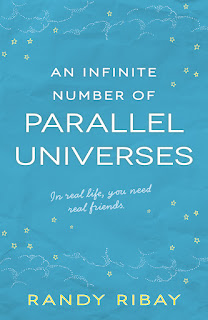 So there's a bunch of books that have come out this year, all YA, whose plots I was constantly mixing up or forgetting, due to their titles full of quantifiers. Here's a quick list to help clear things up. Also, and this wasn't confusing at ALL to organize, three of the authors below will be reading their books at the store this Friday, October 9. Come check them out!

An Infinite Number of Parallel Universes by Randy Ribay (Merit Press, $17.99)
In which four D&D-playing friends find themselves on a road trip, working through the parts of their lives they haven't told each other.

Anything Could Happen by Will Walton (Push, $17.99)
In which a small town kid deals with being in love with his straight best friend.

Everything, Everything by Nicola Yoon (Delacorte, $18.99)
In which a teenager confined to her house as protection from profound allergies starts to fall for her new neighbor.

Always Never Sometimes by Adi Alsaid (Harlequin Teen, $17.99)
In which a pair of best friends, who have made a list of things they would NEVER do in high school, decide in their final year that they might as well try all of them instead.

None of the Above by I.W. Gregorio (Balzer & Bray, $17.99)
In which a high school senior finds out she's intersex...and so does everyone else.

The Impossible Knife of Memory by Laurie Halse Anderson (Speak, $9.99)
In which a teen starts at a new school after five years on the road with her father, dealing with his traumatic memories of Iraq. (This is actually from last year, but the paperback just came out this summer.)

Fans of the Impossible Life by Kate Scelsa (Balzer & Bray, $17.99)
In which three friends become closer as they struggle with romance, bullying, foster home and family problems, and mental health issues.