Best of All Possible and Impossible Worlds

If you didn't make it here for our YA author event on Oct. 9, I recommend you hop on over and check out the books (and the follow-up book club discussion this Thursday*). We had a wonderful and inspiring conversation, with a great group of authors, and enthusiastic readers to hear them read! Kate Scelsa and Lyn Miller-Lachmann both travelled from New York City to be here, while Randy Ribay and Ilene (I.W.) Gregorio are both local to the Philly area -- though Ilene, "practicing surgeon by day, masked avenging YA writer by night," was coming from a full day in surgery and was actually still on call. 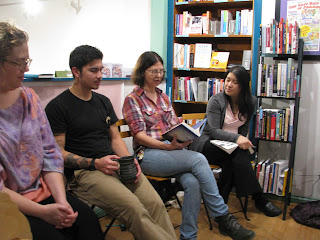 The readings were well-delivered and powerful. None of the authors chose to read from the beginning of their book; instead, each read a scene of transformation from partway through.

In Surviving Santiago, Wisconsin teenager Tina reluctantly returns to her homeland of Chile to visit her father, in the tense political climate of 1989. Lyn offered us the scene where Tina has arrived in Chile and meets her papá for the first time in years, thinking about what he was like in her childhood and how he was changed when he came to the US after his political imprisonment...and wondering what he'll be like now.

In her scene from None of the Above, Ilene gave us the moment when Kristin, who has recently been blindsided by the news that she's intersex, finally decides to take her father's advice and look at information about support groups for people with her condition -- which takes her out of complete despair and offers a measure of hope.

Kate's book, Fans of the Impossible Life, is about three teens trying to move forward from difficult parts of their lives, and in the scene she read, they have put together a ritual, full of silliness and power, to get rid of their demons and invite into their lives what they most want. 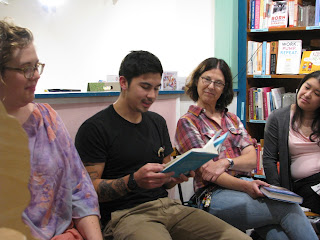 An Infinite Number of Parallel Universes is also about a group of teens dealing with issues in their own lives, but they don't talk to each other about them: at this point they know their D&D characters better than they know each other, and their experiences of the world are separate, and barely overlapping, even when they're in the same room. Randy gave us a scene in which Mari, who runs the D&D game for the group, takes her own recent set of news and writes the destruction of a world.

The discussion that followed the readings was friendly, open, and insightful. 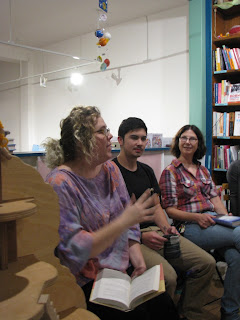 "What was the nicest thing someone has said about your book?" asked an audience member.
Without exception the responses were about reflected experience -- from the teens who tell Randy that the amount of diversity in his writing is realistic, rather than overdone, to the 13-year-old who told Ilene that None of the Above gave her the courage to reach out to a support group, to the adult reader who told Lyn that, from his own experience, he both questioned and understood why Tina's father would want to return home after exile. Kate summed up this general feeling in her own answer: "When you write about something you haven't experienced and have people say you got it right!"

The authors talked about problems with both good reviews and bad reviews, and the frustration with people who use review space to trash books that they don't like and wouldn't normally read -- as though that sort of book shouldn't exist at all. We suggested that there needed to be a website for people to discuss books with the guideline to use only "I" language. Relatedly, we also talked at length about trigger warnings, and how the use of both the warnings and the label itself has changed. Originally conceived as a way to warn people of content that might trigger actual PTSD flashbacks in the readers, it has devolved in many settings into a way to warn readers that they might be uncomfortable with what they read, or might learn something they don't like. Which both discourages reading/learning and dilutes the importance of the trigger warning for those who need it. Kate pointed out that the overuse comes from both ends of the political spectrum.

Further topics included audio books -- Lyn talked about recording one on her own for a friend who's blind -- and the store's QUILTBAG YA shelf: how to present books that explore gender and sexuality in a way that highlights them and yet doesn't compartmentalize them. After the general discussion, the gathering moved into book signings and smaller, equally vibrant conversations...and Ilene got her first page (medical, not literary) of the evening. I got the sense that everyone went home inspired and energized, and it was fun to hear the authors getting excited about each other's writing. Thanks to everyone who came, and whether you were there or not, I'd love to hear your thoughts on these books! 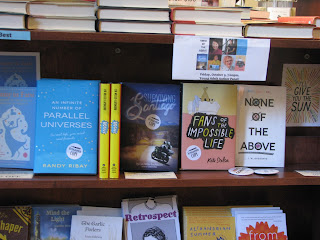 *Big Blue YA Book Discussion on any/all books by these authors: this Thursday, October 22, at 7:00pm. See our website or the Facebook event for more information!