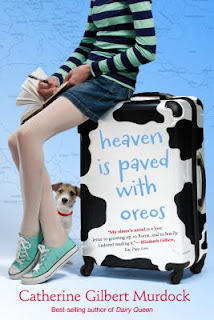 Hi, Catherine! I’m so excited to see a new book from the Dairy Queen universe -- thanks for bringing it to our attention! Heaven is Paved with Oreos was a lot of fun to read, and full of fascinating images and plot turns.

While D.J. Schwenk doesn’t appear all that often in this book, her character is clearly important to Sarah, the narrator. It was cool to see D.J. from the outside, from the point of view of another character. How did it feel to write this shift? Also, is there another person in your life named D.J., or did you really dedicate a book to one of the characters inside it?

Ever since Dairy Queen, I've wanted to show who D.J. is from *our* perspective rather than simply her self-deprecating voice … so the shift to Sarah's POV was really wonderful. I dedicated the book to D.J. because she's been such an important person in my life. In many ways, she's made me who I am, and I'm incredibly grateful for the opportunity to thank her. (And, yes, I do understand that she's a fictional character. But as many writers will tell you, fictional characters take on their own voices and power. Writers have much less control than one would think.)

I love Sarah’s voice, which is so different from D.J.’s and yet is imbued with the same sense of being entirely hers. What got you interested in Sarah Zorn as a character with a story of her own? I remember you saying once that you often rewrite scenes from the points of view of other characters, to see how they look different. Did this story come out of that process?

Sarah, I will confess, is the byproduct of my desire to write a book about Rome. Once I decided that, I spent years (literally) searching for a character to narrate the trip. I also had (see question #1) this desire to write a bit more about D.J. With hindsight, Sarah seems the obvious choice, but boy oh boy did it take a while to settle on her. It helped that she was such a minor character within the Dairy Queen trilogy -- I don't think she had a single line of dialogue. This gave me the freedom to really explore her, and make her who *she* is; I didn't have many constraints.

The trip to Rome is full of references to a 150-year-old travel book, Two Lady Pilgrims in Rome, by the intrepid Lillian Hesselgrave. Is this based on a real book? How did you learn about the 7 pilgrim churches?

Oh, Lillian. If I could, I'd write all of Two Lady Pilgrims myself. Sadly, the book doesn't exist outside of my head, though many travel accounts from the era are equally snarky -- the writing of James Jackson Jarves, for example, or the letters of Charlotte Eaton. It seems that most English-speaking visitors were as parochial and misinformed as Miss Hesselgrave. I believe I first learned about the 7 pilgrimage churches from Wikipedia -- one of those little asides that Wikipedia is so good at, "San Paolo fuori le Mura is one of Rome's historic seven pilgrimage churches" kind of thing. So I started digging around -- which was hard, because there's surprisingly little information -- and realized quite quickly that this would be a wonderful organizing principle for the trip. The 7 churches also helped reinforce other story lines, especially Z's. Thank you, 7 churches. Thank you, Miss Hesselgrave, for giving me a way to present the history of Rome.

I spent one day in Rome once (a Monday, which is a bad day for it, as many places are closed) and I was entertained by the occasional flashes of memory when Sarah went someplace I had been – the Spanish Steps, St. Peter’s Basilica, the Coliseum (which she mentioned, though I’m not sure they saw it). What are your experiences with travel abroad, Roman holidays, and pilgrimages, and how have they influenced your writing?

Obviously I had to go to Italy to research the book, so that was a hardship (joke). I went with a friend who'd never been to Rome, and we had the most amazing experiences visiting the seven churches … I'm getting chills, remembering the singing pilgrims in San Paolo, and the Sunday services at San Sebastiano (the church that Sarah doesn't make it to), and the funeral at San Lorenzo. The trip was such an incredibly special experience. If people reading my book then travel to Rome to see these churches … Wow. Wow wow wow.

I've never thought of myself as a pilgrim in the historic Catholic sense of the word. That said, I believe that a pilgrimage like this, even by someone as sniffy as Lillian Hesselgrave or as skeptical as myself, improves the totality of the universe.

I noticed that, along with Oreos, ice cream figures rather heavily in your new book -- as plot device, ice breaker, mood assessment, comic relief… I’ve observed the influence of food on your other books (particularly the fantasy ones), but it generally hasn’t been something so consistent. What role does ice cream play in your own life, and what flavor(s) do you prefer?

It's strange, but I'm not actually that passionate about ice cream, or Oreos. I mean, I like them (WHO WOULDN'T?), but I can live without them, too. Favorite flavors: coffee, vanilla, mint chocolate chip, gianduia (a hazelnut-chocolate gelato that's death) and, oddly, a coconut gelato I had in Paris that I mistakenly ordered thinking that "nois de coco" meant "chocolate nut," not "coco-nut." Surprise! But it was great.

I am passionate about food generally, which you've surmised from my other writings. I enjoy eating only slightly less than I enjoy cooking (because cooking is both cooking + the promise of eating, so it's the best of everything). And I love to write about food, especially when it's so helpful to the story!

In my second read of Oreos, I realized that, like Dairy Queen, this book deals with questions of communication and lack thereof – what people say or don’t say, and how to talk about difficult things. And of course it was funny (and gratifying) for D.J. to be giving advice and being a role model on these matters. Were these conscious decisions, or did they grow organically in the writing?

These were not conscious decisions at all. As I said, much (possibly everything) about Oreos evolved of my desire to write a book about a girl visiting Rome -- specifically visiting San Paolo fuori le Mura and observing pilgrims, and then visiting Santa Maria del Popolo and seeing the Caravaggio. I wanted her to be with an adult who falls apart in front of the Caravaggio so that the girl has to take responsibility. And learning how to talk about difficult things -- how to talk, period -- isn't that what growing up is all about?

The fact that it's D.J. giving advice on communication skills is the cherry on the sundae.

Voilà, more ice cream!
Do you have other projects in the works that you’d like to tell us about?

Last November I returned to Rome (another hardship, I know) with my husband to fact-check Oreos. While visiting our 5th church, I happened to be reading my favorite guidebook that mentioned that walking the 7 churches earned one an indulgence. "Wait a minute," I thought; "If you're supposed to WALK the 7 churches, shouldn't there be, you know, a ROUTE?" So I sniffed and sniffed around the internet, and then when we got home I sniffed around historic guidebooks and church histories, and I couldn't find one. There is no official route! So now I'm writing -- attempting to write -- an adult non-fiction book about the 7 churches and what the route might be. It's quite ambitious. If I think too much about it, I hyperventilate.

And now, for our regular "3 for 3" book questions:

Such a difficult question! (I just asked my daughter her 3 favorite, and she wailed, "There are so many!") But I'll try:
- The Animal Family by Randall Jarrell. The prose is so simple and so beautiful.
- Watership Down by Richard Adams. Books don't need to be about "important" subjects; they only need to be brilliant.
- Daddy Long-Legs by Jean Webster. The book was published in 1912, but it could have been published yesterday. Totally adorable.

2. What are 3 books that you've read recently that surprised you?

- Heat by Bill Buford. I managed to finish the book without eating everything in our kitchen. I only ate half.
- How to Catch a Bogle by Catherine Jinks. She weaves a history lesson into extraordinary narrative. Amazing.
- No Crystal Stair by Vaunda Micheaux Nelson. I thought it was going to be a typical biography, and it was anything but.

3. What are 3 books that influence/d your work?

- Bloody Jack by L.A. Meyer. The voice. The voice. The voice.
- Rome in the Nineteenth Century by Charlotte Eaton. The real Lillian Hesselgrave; she wraps her insults in gilt-covered ribbon.
- Several groupie autobiographies that I won't list by name because they're rated R, but they really helped me understand the 1960s and where Z was coming from.

Thank you for joining us, Catherine!

Catherine Gilbert Murdock lives outside Philadelphia with her husband and two children. She is the author of the Dairy Queen trilogy, as well as Princess Ben and Wisdom's Kiss. Unlike Sarah, Catherine loves poached eggs on pizza -- especially when eating pizza in Rome. Although she likes eating almost anything in Rome … For more information, visit her website: catherinemurdock.com.

Thanks for reading!!! If you're local to the area, please let the bookstore know if you would like to place a special order for Heaven is Paved with Oreos, due out September 3. You can email orders to orders [at] bigbluemarblebooks [dot] com, call (215) 844-1870, or come see us at 551 Carpenter Lane, in the Mt. Airy neighborhood of Philadelphia.


On August 27th, come check out Cordelia's interview with Caroline Carlson, author of the forthcoming Magic Marks the Spot, first in the series The Very Nearly Honorable League of Pirates.

This book sounds wonderful!!! I love books about travel, especially trips to Rome.

where does she live because on my book report it said extra credit it to find out where she lives?

I don't know whether Catherine's website has more detailed information than "outside Philadelphia" as listed in her bio; I've just updated the interview to include the website link in the bio, if you want to check.