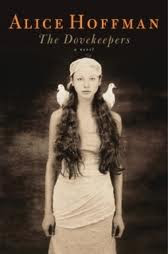 At 10:45p.m, thanks to Mt. Airy Patch, I realized that there was a tornado watch in Chestnut Hill and vicinity between 10:30p.m. and 11:00p.m. I called to my daughter who attempted, unsuccessfully, to round up our dog and two cats, and we retired to the basement. Later, I was taught a lesson about the true diversity of our Mt. Airy village. Some of us slept in the basement. Some of us slept on our third floor surrounded by large trees lulled to sleep by the branches blowing against the windows. Some of us prepared for a disaster, collecting water, canned goods, batteries and all types of battery operated devices. Some of us went for two hour hikes in the woods, admiring the rising water and snapping limbs. The following five picks reflect diversity, having no relationship to one another other than I happened to read parts or all of them in the past month:

The Dovekeepers by Alice Hoffman (Scribner, $27.00)
Available for sale this October, The Dovekeepers is a fictional account of the seven survivors of Massada, masterfully researched and exquisitely written.

What Happened to Goodbye by Sarah Dessen (Penguin, $19.99)
Another young adult lesson about locating one's true self amidst the chaos of changing family and home life.

Rumi: The Fire of Love by Nahal Tajadod (Duckworth, $16.00)
An account of Rumi's life, time and works.

The Magic School Bus Inside a Hurricane by Joanna Cole (Scholastic, $6.99)
A self explanatory choice.

Unlikely Friendships by Jennifer Holland (Workman, $13.95)
A second reminder (see my August list)... this book is now second on the Indie bestseller list.