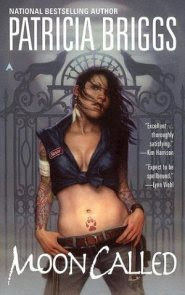 Don’t let the trashy covers put you off. It’s a design thing that all the publishing kids are doing these days: slapping a scantily clad white chick with tattoos and/or ridiculous weapons on the front cover of urban fantasy novels. It usually sends my eyes rolling far into the back of my head because it’s, like, way off-putting. I mean, I know that urban fantasy is a genre like any other, and like any other it has its clichés, and that the clichés can get hecka annoying, like when the first person female narrator prior to meeting her smokin’-hot-sexy-pants vampire/were/fae/angel/demon mate says stuff like “I’m 5’ 10”, 125 lbs with honey-blond hair, but with some eye-liner on I can pass for exotic,” but these fulsome covers make it impossible to separate the wheat from the chaff. But, take heart, dear reader, I have done the dirty work for you. I have slogged through these mass market UF series with their tawdry covers and selected the roses among thorns. Yeah, somebody had to do it.

Moon-Called by Patricia Briggs (Ace, $7.99)
Tattooed Lady: Mercedes “Mercy” Thompson. Don’t let the nickname fool you. Mechanic-by-day, bad-A-by-night, Mercy Thompson is more likely to pop you with a crow bar than show you mercy if her mysteriously keen sense of smell tells her that you’re up to no good.

Grave Witch by Kaylana Price (Roc, $7.99)
Tattooed Lady: Alex Craft. Alex is a witch who’s grave sight allows her to talk to the dead, and Death in particular, who happens to be a blue-jean-wearing hottie. Brings new meaning to the phrase “a date with Death.”

Halfway to the Grave by Jeaniene Frost (Avon, $7.00)
Tattooed Lady: Cat Crawfield. People keep bringing up the B-word when they talk about this series and when I say B-word I mean Buffy, as in Buffy the Vampire Slayer. It probably has something to do with the fact that the heroine kicks some serious buttowski—and it can’t hurt that, Bones, the lead vampire, has a certain tortured British malaise that puts one in mind of Buffy’s vampire (sort of) love Spike.