Erica’s Five Maptastic Reads to Help You Find Your Orientation 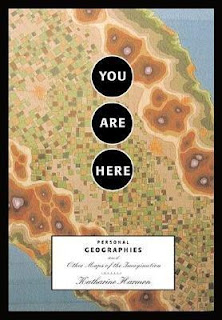 I’ll be honest, maps make me anxious. In order to read them they require two very important things: 1) that you know where you are and, 2) that you know where you’re going. This is a surefire way to send me into an existential crisis. I am that girl who hears the Mahogany theme song every time she steps out the door: Do you know where you’re going to?/ Do you like the things that life is showing you?/ Where are you going to?/ Do you know? So, here are several map collections, real and imagined, guaranteed to point me, I mean you, in the right direction.

You are Here: Personal Geographies and Other Maps of the Imagination by Katherine Harmon (Chronicle, $24.95)
“Fake” maps galore in gorgeous color plates including a Map of Lovemaking and New Map of the Land of Matrimony -- charting stormy seas no doubt.

Atlas of Remote Islands: Fifty Islands I Have Never Set Foot On and Never Will by Judith Schalansky (Penguin, $28.00)
I’m not planning to set foot on these islands either, but I like that Schalansky’s research and beautiful illustrations provide me with highly esoteric (and highly entertaining) knowledge of seldom visited locales in the event that I find myself in a Robinson Crusoe type situation.

Infinite City: A San Francisco Atlas by Rebecca Solnit (University of California Press, $24.95)
Solnit is a master of blending the personal and the historical. Her atlas explores San Francisco thematically, politically and above all personally, while elucidating our modern notions of place.

Transit Maps of the World by Mark Ovenden (Penguin, $25.00)
Yes, a map of Philadelphia’s transit system is featured and it feels quaint and old-timey with its reference to the regional rail lines by their old call numbers (e.g., R7, R8). The Philly map suffers however, from being featured opposite a photo of the Prague subway system which, with its squat train carriages and futuristic tunnels, looks as if you’re shooting toward your destination in a DeLorean.

[Editor's Note: Transit Maps of the World is also one of Jen's June 2010 Picks.]

The Selected Works of T.S. Spivet by Reif Larsen (Penguin, $16.00)
12 year-old cartographer T.S. is probably the only character I’ve ever met who can map a dinner conversation. His brilliant, inventive illustrations haunt the margins of this quirky, charming novel.