Erica's 5 Books with "Paris" in the Title 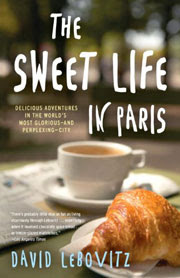 I am not a trendsetter but I can usually discern one—especially when it slaps me in the face with all the theatricality of a maudlin 1950’s melodrama. So it is with the latest trend to hit the Indie Bestseller Lists: books with “Paris” in the title. They say you shouldn’t judge a book by its cover and the same goes for titles, too, I’m sure, but that’s what I’m about to do. I haven’t read a single book on this list, but like Chuck Norris, I’ve stared them down until I’ve gleaned the information that I wanted.


Lunch in Paris: A Love Story with Recipes by Elizabeth Bard (Back Bay Books, $13.99)
Huh. Stumped on this one. I have no idea what this book could be about. Thankfully Back Bay Books has seen fit to put the following gem of a line on the front cover: “Romance on the front burner… it’s Eat, Stay, Love with a side of spiced apricots.” Well, just as long as no one is falling in love with a Frenchman and peppering her narrative with cutesy recipes.


The Paris Wife by Paula McClain (Random House, $25.00)
Rumor has it that the titular wife in question is the first wife of famed drunkard, er, writer, Ernest Hemingway. I don’t care who she is. The only thing I know is that the Philadelphia Wife could beat the Paris Wife’s @$$ any day.


Hungry Woman in Paris by Josefina Lopez (Hachette, $12.99)
Totally about aliens, brain-sucking, body-leeching aliens. Nothing at all to do with women eating and finding love and/or spiritual awakening in Paris, which is a shame if you ask me. There just aren’t enough of those books.

Paris, Paris by David Downie (Broadway, $15.00)
I’m hoping that this is just like SPECTACULAR, SPECTACULAR, the show within the show that was Baz Luhrmann’s 2001 musical extravaganza Moulin Rouge. In other words, it should be heavy on the Ewan McGregor and light on the Nicole Kidman, who should die of consumption at the end. I base my hopes solely on the fact that this is classified as a travelogue (and that the author wears an eye patch).

Foreign Tongue: A Novel of Life and Love in Paris by Vanina Marsot

Blame It on Paris by Laura Florand

That Summer in Paris by Abha Dawesar

Down and Out in Paris and London by George Orwell

Dear Erica,
Can you show to be Chuck Norris and stare down a book until I glean the information I need? Thanks.

There is a lot of squinting involved in a book stare-down. Also, it helps if you are a ginger-haired martial artist.

Brilliant list. Dig your website, too. I'm keeping my fingers crossed that Philadelphia will one day be an "endless source of inspiration for novelists" and start cropping up in titles everywhere.

Thanks Erica. you are very welcome to do a guest post on the best books set in Philadelphia for Packabook if you fancy it - I'd certainly love to hear your suggestions! I AM very slowly working on cataloguing US books by city and state to add to the site....so could do with all the help I can get!

Paris-Chien: adventures of an ex-pat dog!