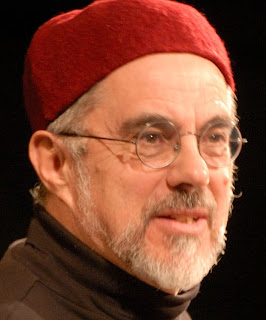 1) How would you describe your poetry?

I think if I were to characterize the overall intentional aesthetic of my work, it would be a certain luminosity. A luminosity of thought, of image and of goal. And an open-hearted deep-listening and seeing for the Face of The Divine in every manifestation in our lives and around us, constricted only by our own limitations. Luminosity and elasticity, or as my Mexican poet/mentor, Marco Antonio Montes de Oca called it in the early 60s in Mexico City, “plasticidad,” or “plasticity.” And by it he meant not “plastic” but rather flexible and somehow always moving, as in cinema, with images transforming and metamorphosing into other images, associative and fluid. He taught me to keep the metaphors active, and I’ve gone through phases of velocity, where I wanted the poem to move quickly, without looking back. Olson helps in this regard, with his thoughts about poetic association and flexibility, famously (and not always practiced) in his essay on Projective Verse. Poems are little dioramas with miniatured life in them allowing us to connect without fear of agoraphobia, as it were, which me might naturally feel in the boundaryless world we live our lives in, under the vast ocean of stars. Even the Iliad is miniatured, where huge epic warfare is comprehensible, graspable, whereas on the battlefield it would be simply blood and chaos. It’s metricalized, musical, and emitted from a single human voice, infusing action and thought with luminosity.

Then there’s the spiritual aspect, which I’ve infused with my American lingo (via Rumi and more especially years living among Sufis in Morocco, England, Spain, Nigeria, etc.), to raise the state of the reader as I’m raising my own state in the process of writing, which is why I call my overall poetic project, The Ecstatic Exchange.

2) How does poetry fit into your everyday life?

Everyday. I’ve spent my life writing, since about the age of 17 or so, and am reaching my 70th birthday this year (I know!). At about 18 or so I seriously dedicated myself to poetry, and it has been a concern and practice all these years, with about a ten-year break in Sufi community apprenticeship and soul-transformation, which only deepened and reoriented my work when I resumed writing in plethoric abundance afterwards (I have about 60 manuscripts of books of poetry, 25 of them published to date: 6/3/10). During the years of raising a family I worked day jobs and wrote at night or in the wee hours of the morning, before dawn, and never really had time to send poems out and create a career, as it were, once I became a Muslim in 1970. I’d had some success in my twenties, with two books of poetry published by Lawrence Ferlinghetti of City Lights in San Francisco, but my departure from America into the deserts of divesting and increasing curtailed any reaping of my early success to ensure its continuance. I’ve been out here, more or less on my own, not quite in the mainstream, writing and publishing my poems for whomever has ears and heart’s interest in them, retirement since 2005 allowing me the time to really establish the texts of my works and continue writing into the mortal future.

3) What poets and/or authors inspire you?

Whitman is a shaman mentor, and Blake, and the Beats with their real, if shaggy, longing for transcendence. The Latin American poets, like Cesar Vallejo, a true spirit-blaster, Rimbaud always and forever, Vasco Popa, his amazing folk metaphysic, Tomas Salamun, goofily free and deep, Ezra Pound, the honer of a clear language, Rene Char, whom I can never quite understand either in French or English, Apollinaire, his cubist blocks of illumination…

And then the divine and sparkling panoply of Hafez, Rumi, ‘Attar, ibn Farid, and the great tradition of Sufi shuyukh (Masters) who put their hearts into poetry of the moment and of the deep teaching both to instruct and to inspire spiritual travel.

But there are always and have always been many, spongeification being my way of drawing up light from everywhere and everyone… The Outside of Colin Wilson being a great springboard to setting out on my own and trusting my own soul’s work, and the Surrealists with their daring and unconscious Sufism, and the musical forays of Terry Riley, Messiaen, etc. Great extreme works of art that are also focused on real knowledge-transmitting and yearning always for more, restlessly eager to expand and go beyond ourselves.

4) How does the community of Philadelphia play a part in your poetry?

Since moving here with my family in 1990 I’ve participated in many poetry readings, particularly with Eileen D’Angelo’s Mad Poets Society programs, and her indefatigable sponsorship of same. But I’ve also traveled to England and Abu Dhabi, Cairo and Morocco to read and perform (both poetry and a sometime puppet theater), so I have a global and international view, though I very much cherish the local activity and its ever-enthusiastic participants.

5) What is the last book you have read that you enjoyed? Tell our Big Blue Marble community a little about it.

I think I have a kind of creative attention deficit disorder, in that I get terribly excited by a new book, begin it and the next day I’m onto something else, my own editing and writing actually taking precedence, though I will read in and at a book for months, which is why I love reading poetry, since a poem is often as full as War and Peace but not quite so bulky and time-consuming!

But of Sufi books, I’ve been reading the book of the founding Master of our Sufi Order, Sidi Hasan al-Shadhili, The Mystical Teachings of al-Shadhili, translated by Elmer Douglas, and The Book of Illumination, of ibn ‘At’Allah al-Iskandari, his disciple and the shaykh who came after him. Reading these books are a miner’s descent into the heart, and there’s always ore and real treasure to be found. Pungent single lines like, “Lifting the veils of separation and alienation helps us endure divine decrees without agitation” have both a salutary and inspiring effect on our understanding and on the wellspring of poetry. I’ve also been reading The Zen Works of Stonehouse, Poems and Talks of a 14th Century Hermit, translated by Red Pine. Truly amazing poems, where inner and outer nature are fused and interpenetrating, with sweet outward observations standing also for spiritual states and realizations as well as standing for themselves in radiant (luminous) and simple eloquence. But I’ve also been dipping into Franz Wright’s God’s Silence, a kind of Bukowski-ish poetry with Rilkean sensitivity if you will, but that’s perhaps not quite Wright. I love so much work, and am ravenous to read, yet aware of my time-limit (mortality’s zephyr’s blowing this’a-way) and need to edit and publish my own poetry, that it’s all an ongoing and exploratory labor of reading and writing, editing and then playing a bit of piano (I bang out weird music beautifully)… and so it goes.

Born in 1940 in Oakland, California, Daniel Abdal-Hayy Moore's first book of poems, Dawn Visions, was published by Lawrence Ferlinghetti of City Lights Books, San Francisco, in 1964, and the second in 1972, Burnt Heart/Ode to the War Dead. He created and directed The Floating Lotus Magic Opera Company in Berkeley, California in the late 60s, and presented two major productions, The Walls Are Running Blood, and Bliss Apocalypse. He became a Sufi Muslim in 1970, performed the Hajj in 1972, and lived and traveled throughout Morocco, Spain, Algeria and Nigeria, landing in California and publishing The Desert is the Only Way Out, and Chronicles of Akhira in the early 80s (Zilzal Press). Residing in Philadelphia since 1990, in 1996 he published The Ramadan Sonnets (Jusoor/City Lights), and in 2002, The Blind Beekeeper (Jusoor/Syracuse University Press). He has been the major editor for a number of works, including The Burdah of Shaykh Busiri, translated by Shaykh Hamza Yusuf, and the poetry of Palestinian poet, Mahmoud Darwish, translated by Munir Akash. He is also widely published on the worldwide web: The American Muslim, DeenPort, and his own website and poetry blog, among others: www.danielmoorepoetry.com, www.ecstaticxchange.wordpress.com. He is also currently poetry editor for Seasons Journal, and a new translation by Munir Akash of State of Siege, by Mahmoud Darwish, from Syracuse University Press. The Ecstatic Exchange Series is bringing out the extensive body of his works of poetry.

(many to appear in The Ecstatic Exchange Series)

Burnt Heart/Ode to the War Dead (published by City Lights, 1972)

This Body of Black Light Gone Through the Diamond (printed by Fred Stone, Cambridge, Mass, 1965)