Five Jewish-y Books that Sheila Likes a Lot, for Many Ages

Mona in the Promised Land by Gish Jen
(Random House, $14.95)
The story of a Chinese-American girl growing up in a thinly-disguised Scarsdale, NY in the late 60’s and early 70’s. Mona works the peer counseling hotline and the synagogue and converts to Judaism (without telling her parents): a comic and wonderful exploration of race, identity, and the conflicts facing second-generation immigrants in America.

The Yiddish Policeman’s Union by Michael Chabon
(HarperCollins, $15.95)
Imagine a classic hard-boiled detective story set in an alternate world where Jews fleeing Hitler settled in Sitka, Alaska, creating a Yiddish-speaking city-state on a 60-year lease that’s about to expire as the book opens. Plus, fabulous use of the word “Jewess.” 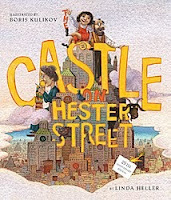 The Castle on Hester Street by Linda Heller
(Simon & Schuster, $15.99)
With vibrant new illustrations by Boris Kulikov, this kids’ book conveys the Jewish immigrant experience to a new generation via a wonderful set of tall tales.

Nachshon Who Was Afraid to Swim by Deborah Bodin Cohen
(Lerner, $8.95)
A lovely story for younger kids about bravery and faith based on a midrash (i.e., a story about a Biblical story). Before the Reed Sea parted, Nachshon walked in. Explores a part of the Passover story that’s not in the haggadah.

Jewish Holidays All Year Round by Ilene Cooper
(Harry N. Abrams, $21.95)
This is a book aimed at families with elementary-school-aged children, with stories and projects for each holiday. It has rich content and lovely multi-ethnic illustrations of Jewish families.
Posted by Jen at 4:22 PM