Community Book Review: The Dark Side: The Inside Story of How The War on Terror Turned into a War on American Ideals 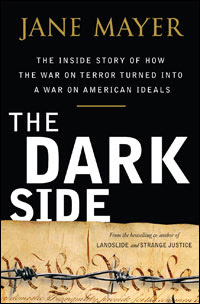 The Dark Side: The Inside Story of How The War on Terror Turned into a War on American Ideals by Jane Mayer

This book presents a heartbreaking parade, not just of horrifically abused detainees but earnest do-gooding government employees who actually believe in American ideals. The horror film atmosphere is most obvious in the scripted "takedowns" in which teams come in the night, but in the "don't go near the old farmhouse!" shock when some would-be public servant says "we don't torture! not this executive!" only to be proven desperately, tragically wrong. At the center of this horror is not even Cheney, who at least holds a constitutional office, but Cheney's "Cheney", his lawyer David Addington. Addington is a towering, raging bully, claiming the "president has already decided this!" as his cackling refrain. This book by New Yorker reporter Mayer definitely supports the "Bush as tool" theory, as the supposed wielder of all this executive power is portrayed as a disengaged cipher with a five minute attention span.
Meanwhile, Cheney and his own evil genius dream up a nightmare of a policy for the world's most powerful country, a country that apparently wrote the Geneva Conventions and is the custodian of their physical hard copy, appropriately located in the marginalized State Dept. The accounts of torture trying to extract confessions of things that don't exist (most damningly a Iraq-9/11 connection) brings the reports of Iranian interrogations unpleasantly to mind. There are good guys here(even John Ashcroft!), but they end up disillusioned and out of work. The book is particularly disheartening to read as Obama escalates Afghanistan and keeps plenty of those executive powers just in case. But it's nice to know that someone believed in US ideals, even if us cynical lefties don't.

Reviewed by Jesse Bacon
Posted by Maleka at 5:35 PM