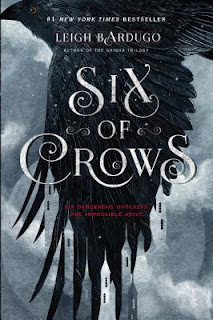 More book recommendations from our community. Over the three instances of On Fridays, We Fight Back!, people have been finding space, guidance, and company for the various actions we've taken -- calling representatives and other government officials, writing to electors, sending comfort to survivors of violence. Please come join us, Fridays between 2pm and 6pm!

from Lucas Jaeger:
Six of Crows by Leigh Bardugo
"It's a captivating tale that will keep you entranced for days."

from a customer:
Cloud Atlas by David Mitchell
"A nested series of six stories that will linger with you for years. I've never stopped thinking about it."

from staffer Mariga Temple-West:
A is for Atom: A Midcentury Alphabet by Greg Paprocki
"Humorous alphabet book with marvelous 'mid-century' illustrations, and so wonderfully inclusive!"

from a customer:
Perks of Being a Wallflower by Stephen Chbosky
"Great book for young people."

from Hillary Kruger:
Delicious by Ruth Reichl
"A great escape into the world of food!"

from Paul Fitzpatrick:
Man's Search for Meaning by Viktor Frankl
"Frankl's philosophy is a survivalist philosophy. Despite staring into the face of evil itself, Frankl reminds us of the importance of meaning and maintaining our own personal freedom."

from Robert Bingham:
The Man Who Quit Money by Mark Sundeen
"'Money is a communal delusion.' (Comment I just overheard that is very relevant.)"