During the growing outbreak of measles in Southern California and environs, it becomes ever more clear that lots of people, including doctors, have never seen measles before and are not familiar with its presentation or its dangerous complications -- as is true of many diseases that used to plague our forebears. Here are five books (plus a few more) that provide a powerful and close-up view of some illnesses that, due to vaccines or antibiotics, no longer scare us the way they once did. 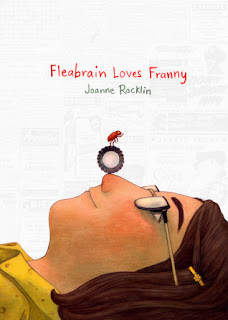 polio:
Fleabrain Loves Franny by Joanne Rocklin (Abrams, $16.95)
This new release is the story of ten-year-old Franny, who is relearning to navigate her world, both physically and socially, after contracting polio -- while living in the neighborhood of Pittsburgh where Dr. Jonas Salk is working hard on what Franny hopes is a cure. Alternate point of view (and some diversion for Franny) provided by Fleabrain, a flea with literary aspirations who lives on her dog's tail.

yellow fever:
Fever 1793 by Laurie Halse Anderson (Simon & Schuster, $7.99)
A story of the eponymous yellow fever epidemic, which took place in Philadelphia. Follows 14-year-old Mattie Cook through her family's attempt to flee the fever, only to return and deal with it in a city that is falling into chaos. Includes a fascinating look at competing types of care, as physicians grasp for ways to contain the epidemic. About a week after I read the book I found myself walking in Washington Square, where, I had just learned, mass graves accumulated during the epidemic. It felt suddenly very different, walking on history...

influenza:
Dreamers of the Day by Mary Doria Russell (Ballantine, $15.00)
This book is not about influenza; it's a historical novel about the politics of the Middle East in the 1920s, with Lawrence of Arabia and Gertrude Bell as featured characters. However, it starts by vividly framing the Roaring Twenties in the United States as a rebound from the horrors of death -- not just after World War One but also after the 'flu epidemic of 1918-1919 that ran rampant through otherwise healthy populations and devastated entire families and communities.

measles:
Pippi in the South Seas by Astrid Lindgren (Puffin, $5.99)
I hadn't reread the third Pippi book in a long time, so I was surprised to discover recently that her friends Annika and Tommy both come down with the measles, which confines them to bed for weeks and leaves them pale and shaky for a long time afterward. (Caution: this book, more than the others in the series, is predicated on a strongly colonialist view of the south sea islands.)

scarlet fever:
All of a Kind Family by Sydney Taylor (Yearling, $6.99)
A wonderful tale of life on the Lower East Side of Manhattan in 1911. Scarlet fever shows up just before Passover, and the house is quarantined for the duration. (I was originally going to feature By the Shores of Silver Lake here, since the effects are more dramatic, but it turns out that Mary Ingalls' blindness was likely caused by something quite different, such as viral meningoencephalitis. Scarlet fever does not cause blindness.)

Runners-up:
influenza and black death:
The Doomsday Book by Connie Willis (Spectra, $7.99)
malaria ("fever 'n' ague"):
Little House on the Prairie by Laura Ingalls Wilder (HarperCollins, $6.99 or $8.99)
scarlet fever again:
Little Women by Louisa May Alcott (Penguin, $3.95)
pertussis:
I'm fairly certain that I once read a book in which someone has whooping cough. On a train, maybe? Does anyone have any idea what book this is? Please let me know!

Thanks! (That's Mrs. Mike: The Story of Katherine Mary Flannigan by Benedict and Nancy Freedman.)

Great list, jen! I don't know the whooping cough story you refer to but is sounds perfect for Dr Suess:
Sue was coughing on a train
Coughed so much it hurt her brain...

Thanks!
Hm...
Nearby riders sidled off
Recognizing whooping cough...