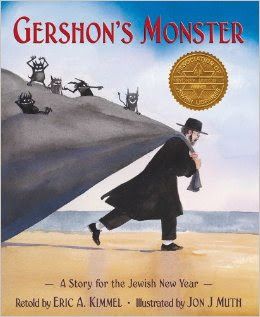 Gershon's Monster by Eric A Kimmel and illustrated by Jon J. Muth (Scholastic, $17.99)
Muth is an exceptional painter whose watercolors are both expressive and gentle. This is a wonderful Jewish New Year book for all ages which includes a well-written explanation of "t'shuvah," the concept of repentance or returning done during the high holidays. (Caroline Kennedy's Poems to Learn by Heart is also illustrated by Muth.)

TRAIN by Elisha Cooper (Scholastic, $17.99)
Also done in water colors, Cooper's colors and design makes this a delight for all transportation lovers.

Heart and Soul, Kadir Nelson (HarperCollins, $8.99)
Nelson is an award-winning author and painter. All of his books radiate expert use of light and shadow to create expressions larger than life.

The Tortoise and the Hare by Jerry Pinkney (Little, Brown, $18.00)
Well known and well loved, Pinkney's water colors are a magical addition to his rendition of traditional fairy tales.

The Fortune-Tellers by Lloyd Alexander and illustrated by Trina Schart Hyman (Puffin Books, $6.99)
All of Hyman's illustrations create a magical setting for the tales as they unfold.