The Seventh Annual Mt. Airy Kids' Literary Festival will be held this year on May 17, 18, and 19th. Here are a few festival-related books you might run into at the bookstore while you are here! 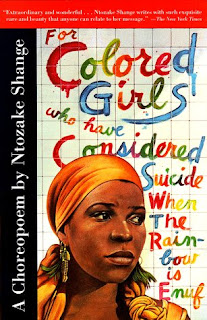 for colored girls who have considered suicide/when the rainbow is enuf by Ntozake Shange (Scribner, $12.00)
In honor of the Youth Poetry Slam (Friday, May 17, at 6:00), I've chosen this iconic work from 1974 which has been described as a "dramatic prose poem" and a "choreopoem." It has been performed all over the world, including on Broadway, and was made into a motion picture by Tyler Perry. Sapphire, author of Push, writes, "If there are shoulders modern African-American women's literature stands upon they belong to Ntozake Shange...." This is an oldie-but-goodie that no doubt continues to inspire spoken word poets old and young!

The Flame in the Mist by Kit Grindstaff (Delacorte Press, $16.99)
Kit Grindstaff will be reading from her new novel, a fantasy-adventure for fans of Phillip Pullman's The Golden Compass, at 12:15 on Sunday, May 19. You can read a fantastic interview with Kit here on the Big Blue Marble Blog.

Boy + Bot by Ame Dyckman (Alfred A. Knopf, $16.99)
Ame Dyckman will be reading from Boy + Bot, as well as giving us a special sneak peak into her forthcoming book, Tea Party Rules, on Saturday, May 18 at 2:00. Not only that, but there will be robot crafts and giveaways!

Harry Potter and the Sorcerer's Stone by J. K. Rowling (Scholastic, $10.99)
Maybe you're seven years old and you've only just started the Harry Potter series, maybe you're seventeen or forty-seven or seventy-seven years old and you've read them all so many times you've lost count .... and you're sooooo jealous of that seven-year-old who just got started! No matter what, if you love Harry Potter like Grace Gordon does, you don't want to miss her fun-filled workshop on Saturday, May 18, at 12:00. There will be Harry Potter themed snacks, wand making, and fun character games. Come in costume if you want!

Adventures in Cartooning: How to Turn Your Doodles into Comics! by James Sturm, Andrew Arnold, and Alexis Frederick-Frost (First Second, $12.99)
I will be using this book in my Graphic Novel/Comic workshop on Saturday, May 18, at 3:00. It combines simple lessons in cartooning with a "rip-roaring story" about "an impatient knight, a cowardly horse, and a magical elf" who are "off to rescue a princess and slay a dragon ... and they're learning to make comics along the way!" I look forward to learning together on Saturday as we turn our own doodles into comics, or, for the more ambitious among us, start our very own graphic novels! This terrific how-to book comes with a companion activity book with lots of great ideas and room for your own comics.

Kit Grindstaff's book is looking good! It's on my TBR list.