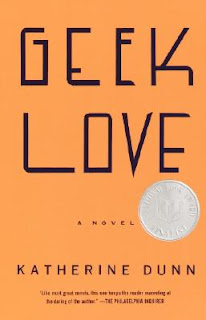 Have you noticed Geeks are getting way too much play these days? Even before Alexandra Robbins’s The Geeks Shall Inherit the Earth, there started to abound some kind of cultural caché of coolness in conjunction with being a Geek. This is absolutely fulsome, people! What about the original Geeks, the ones who bite heads off of live chickens in carnival sideshows? They don’t want to be cool and they don’t appreciate having the word Geek co-opted by runty ne’er-do-wells hoping to parlay their quirky, underdog, outsider status into the new chic. To that end, I’ve compiled a list of books designed to restore meaning to the term Geek, while paying homage to angry, creepy carnies everywhere.

Something Wicked This Way Comes by Ray Bradbury (Avon, $7.99)