Just as some of the fairy-tale movies out this summer* don’t follow traditional narratives, these books take traditional tales as their starting points and then go their merry ways... 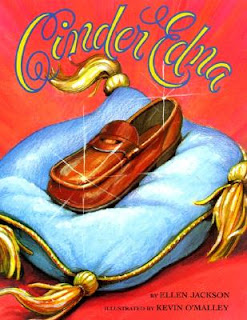 Cinder Edna by Ellen Jackson, illustrated by Kevin O'Malley (HarperCollins, $6.99)
If Cinderella had had a pragmatic and practical next door neighbor, how might their stories have compared...?
[picture book]

Ella Enchanted by Gail Carson Levine (HarperCollins, $6.99)
An explanation we’ve all been waiting for. What a nice fairy godmother to offer a newborn the gift of obedience....Not.
[kids’ chapter book]

Ash by Malinda Lo (Little, Brown, $8.99)
Another Cinderella tale, with a vastly different take on the world of Fairy. [young adult]

Into the Wild by Sarah Beth Durst (Penguin, $7.99)
And supposing you’re a basically regular kid in central Massachusetts who has to keep all the stories of fairyland safe and tame under your bed?
[kids’ chapter book]

Witches Abroad by Terry Pratchett (HarperCollins, $7.99)
The witches of Lancre are called upon (or at least one of them is) to take over fairy-godmothering in distant Genua, where they are charged with the difficult task of making sure the story doesn’t happen.
[fantasy]

plus
Instructions by Neil Gaiman, illustrated by Charles Vess (HarperCollins, $14.99)
What to do if you suddenly find yourself entering a folktale or fairy story. Beautiful pictures; sage advice.
[picture book for all ages]

*This is our final list based on the Summer Fairytale/Superhero Movie Promotion! Go fetch your tickets, and bring them in before Labor Day...