Another list related to our summer movie promotion, which is still ongoing, despite the terrible and sobering events of last week's Dark Knight opening. 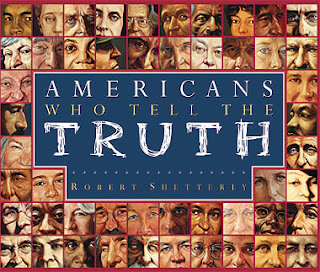 Americans Who Tell the Truth by Robert Shetterly (Penguin, $7.99)
“Stunning portraits and stirring words of brave citizens from all walks of life.” (Indiebound.org.) Here are paintings of fifty heroes (from an ever-growing collection) comprising folksingers, teachers, scientists, historians, writers, and leaders of resistance movements, among others...

After Gandhi: One Hundred Years of Nonviolent Resistance by Anne Sibley O’Brien (Charlesbridge, $24.99)
From 1908 to 2003, from Birmingham to Belfast to Burma, nonviolent resistance movements have made dramatic change in the world. After Ghandi gives excellent historical and biographical summaries of 15 world conflicts and the peaceful protests that confronted them.

Number the Stars by Lois Lowry (Random House, $6.99)
This is a fictional account, but the history is true: a story of two families taking part in the Danish citizens’ determined -- and mostly successful -- attempts during World War II to smuggle all Danish Jews to safety and out of the Nazis’ reach.

The Warmth of Other Suns: The Epic Story of America's Great Migration by Isabel Wilkerson (Random House, $16.95)
Before reading this book, I knew about Jim Crow laws, about segregation and lynching, all as individual trends and incidents. Never before had I seen the vast scope of racism in the South, with overhanging threats pervading all aspects of life. Wilkerson sweeps it all together in a huge swath of motion: individuals fed up enough to leave everything and escape -- to an imperfect North, but with hope for better lives for themselves and their children.

All-of-a-Kind Family by Sydney Taylor (Random House, $6.99)
When I was a kid, I didn’t understand that this book was fictional, and written outside its time. It’s just day-to-day life for first generation Jewish immigrants in Manhattan’s Lower East Side, but its very difference from the modern world gave me a powerful sense of the kinds of struggle and fortitude my great-grandparents must have had when they, too, were building new lives in the same place, at around the same time.